And so, it’s Capri once again!

It has already been a year since the last article about Capri development. Although we have many more parallel projects, the development is continuing on. In this article I would like to tell you, or maybe even to boast about our latest achievements, to present several completed concept arts and screenshots of both completed locations and separate objects in the engine. 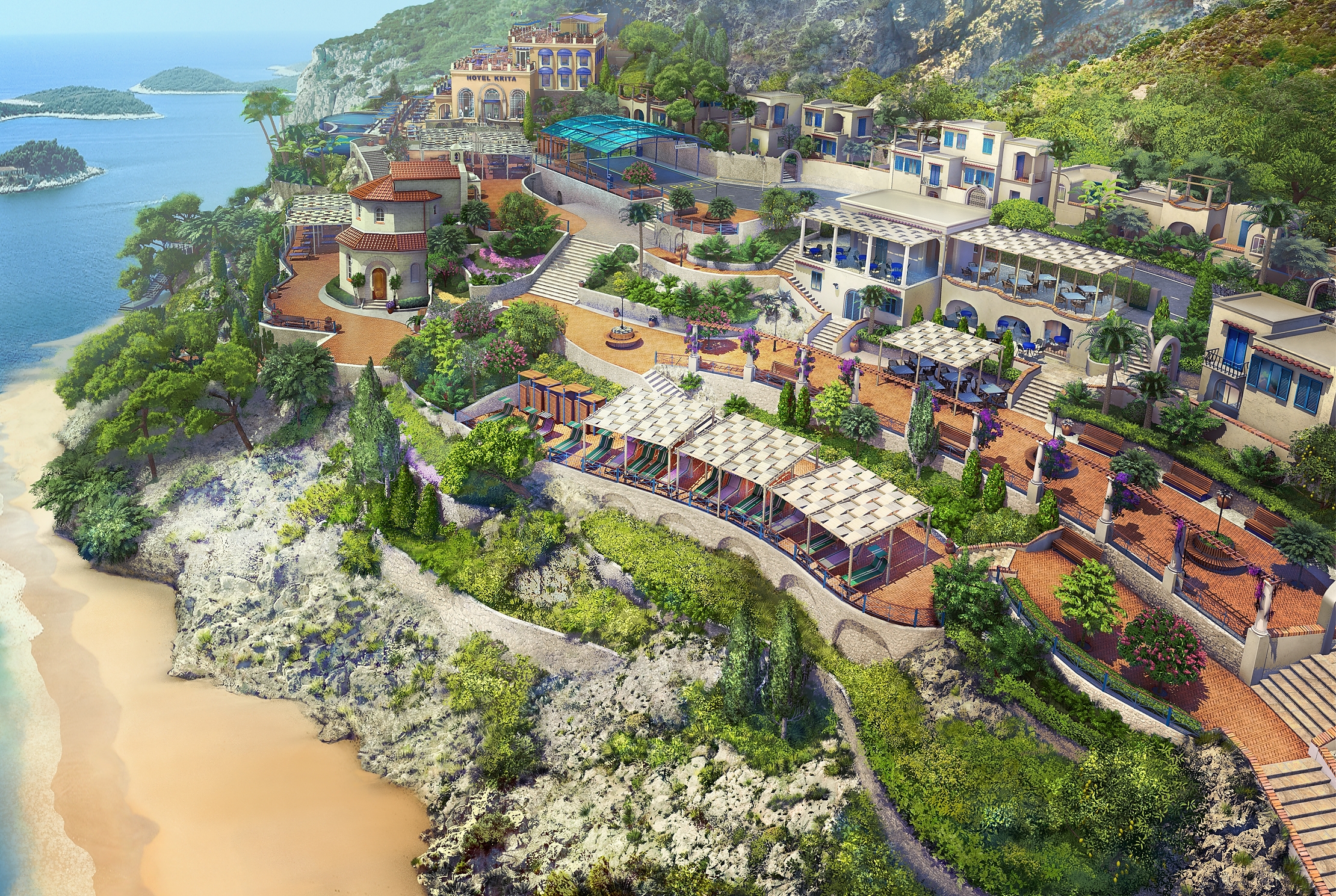 At the moment we have a number of completed concept arts and elaborate high-poly locations, in which the principal goals of the future project were achieved. First of all, I would like to tell you how I work: the process of creating concepts. The main part of my work is done in 3D, for which I use Blender. I mostly use Google panoramas as reference images. Firstly, I create multitudes of objects in Blender, including architecture, landscapes, trees and many others. Then I make textures for them, mostly tiled textures. For this, I use Krita graphics editor, and I should say that I am happy with it for the most part. However, new versions tend to be unstable and usually contain some bugs. Along with texture painting, I also use Krita for enhancing rendered images. For rendering, I use Blender Internal, because it produces images much more similar to the engine graphics than, for example, Cycles would.

So, the process looks like this: Blender – Rendering – Krita. What makes it so convenient? Blender is great for architecture and landscape design, it even allows you to walk around the scene and get an idea of how the end result will look. Moreover, you get not only a pretty image, but also a hi-poly model, and for a 3D artist, it is more convenient to work with a model than with just a flat image. And to decrease the amount of geometry in the scene along with rendering time, you can use render enhancement. It is very useful if you need to adjust colors, or add additional details, or change the mood of the lighting. 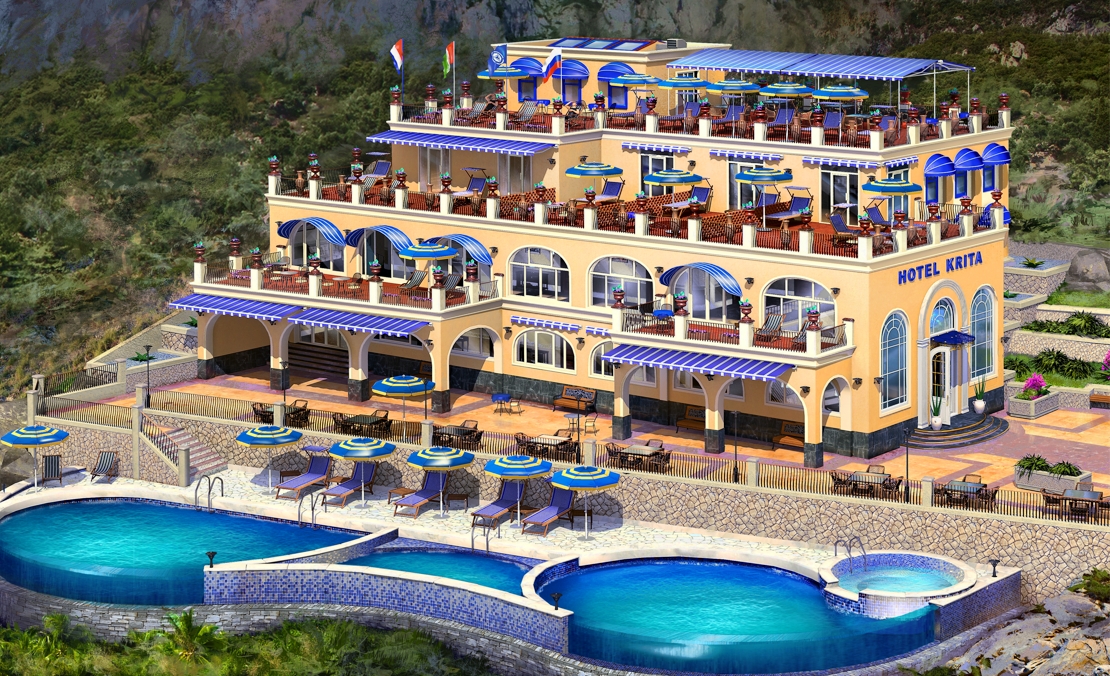 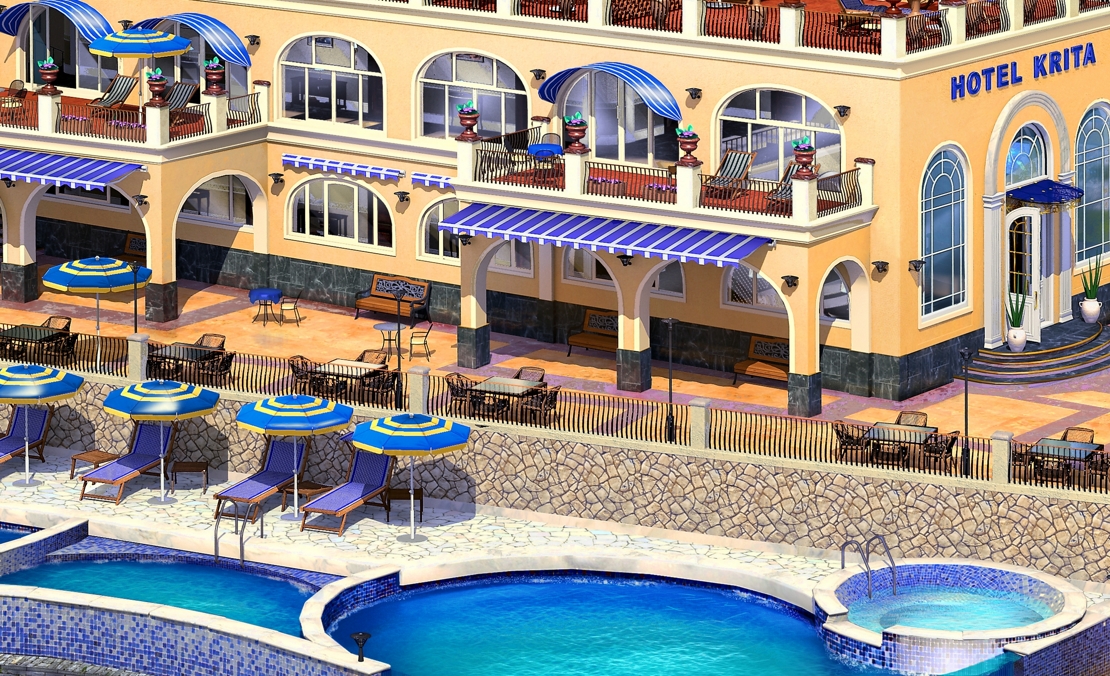 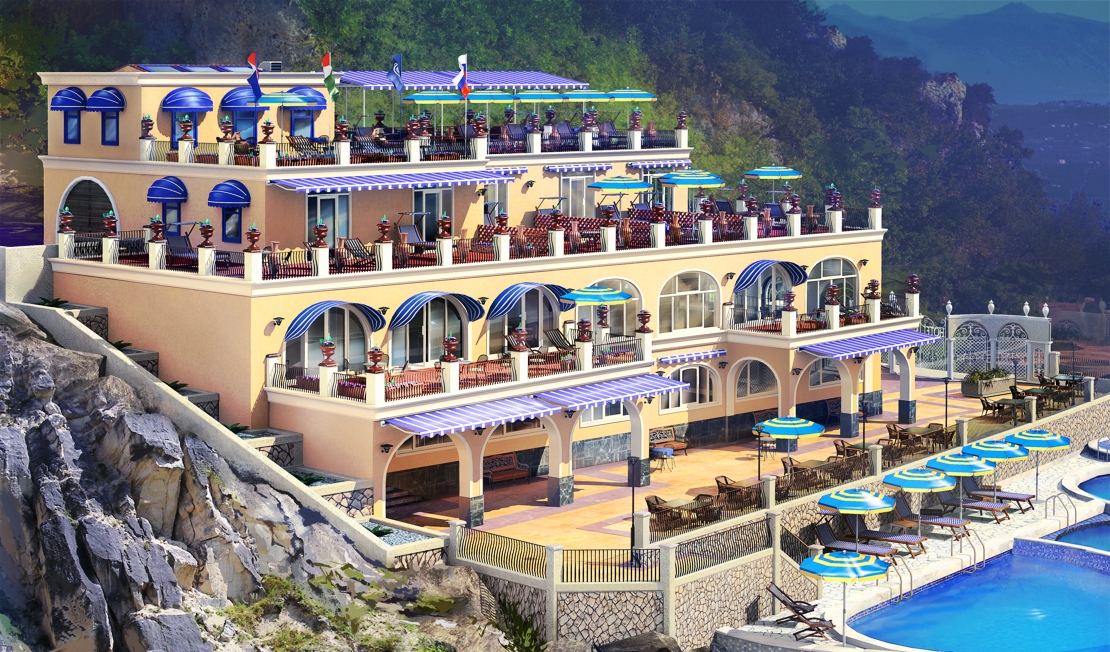 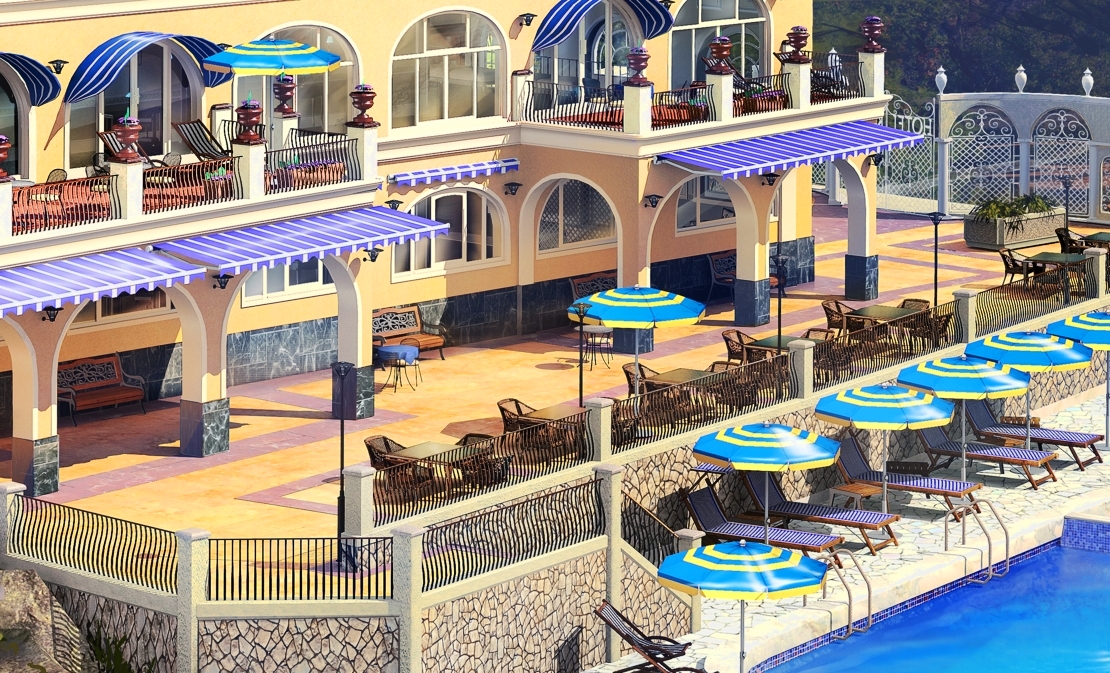 And now let’s take a look at the concept arts! On the first one of them, you can see several of the key scene objects, such as the hotel, the church, residential area, bus stop and lots of secondary objects. All of these objects are designed in the style of traditional Caprian architecture, and each one of them has a real prototype on the real island of Capri. One of the objects is the Krita Hotel. Being an important object, it is very detailed, and it also has two floors of inner space. At the moment this article is written, the hotel is almost done, complete with interior with furniture. 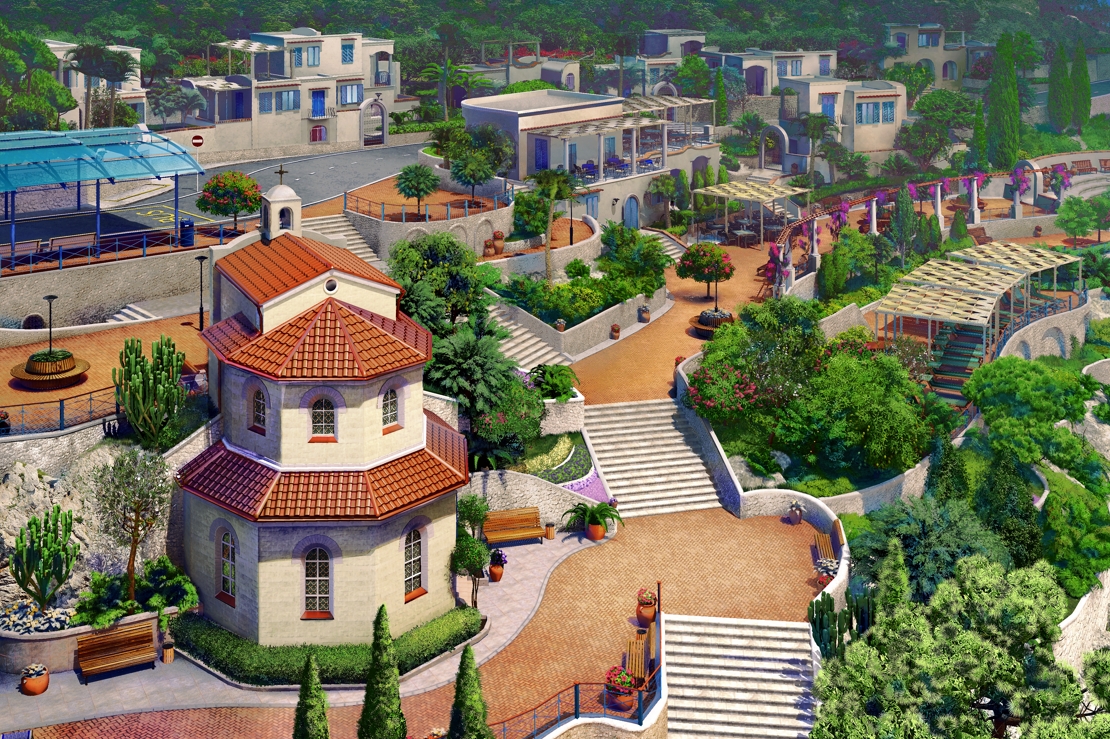 Figure 6. The church and the street (concept painting). 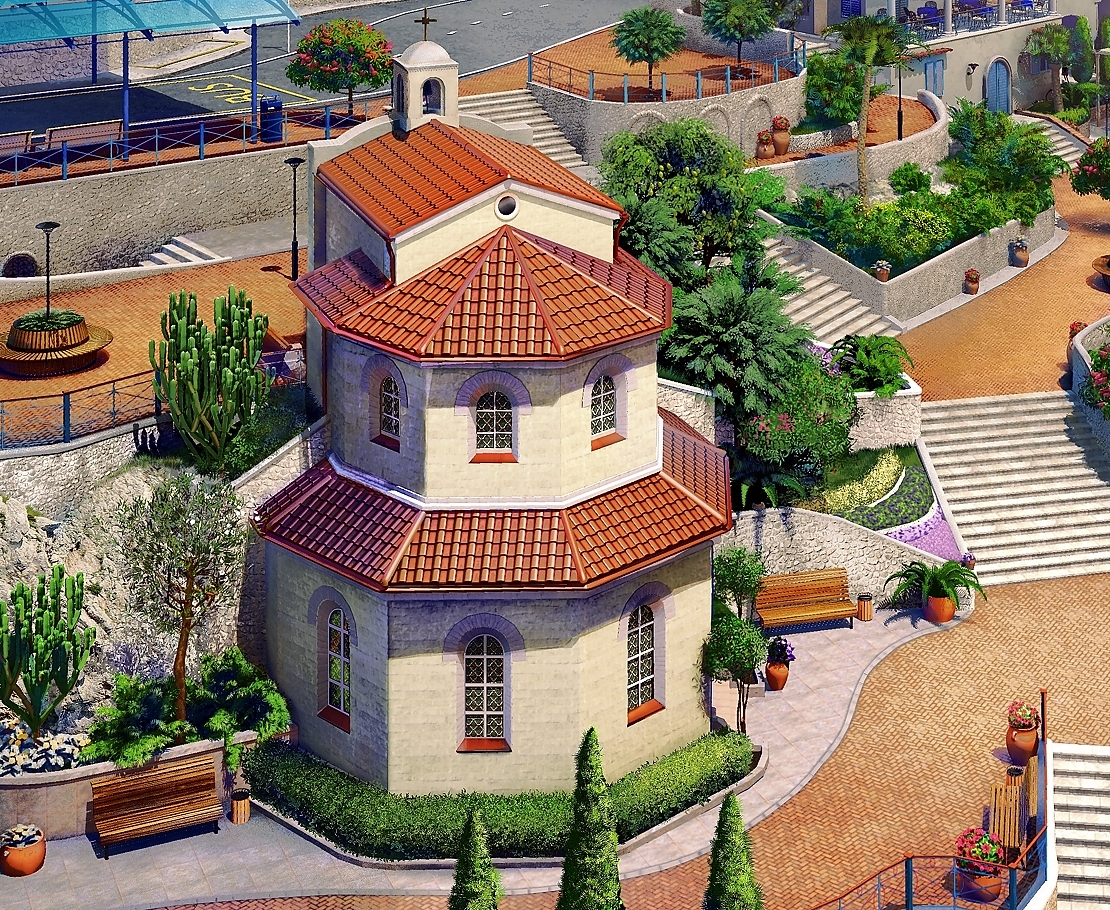 Figure 8. The church and the street. 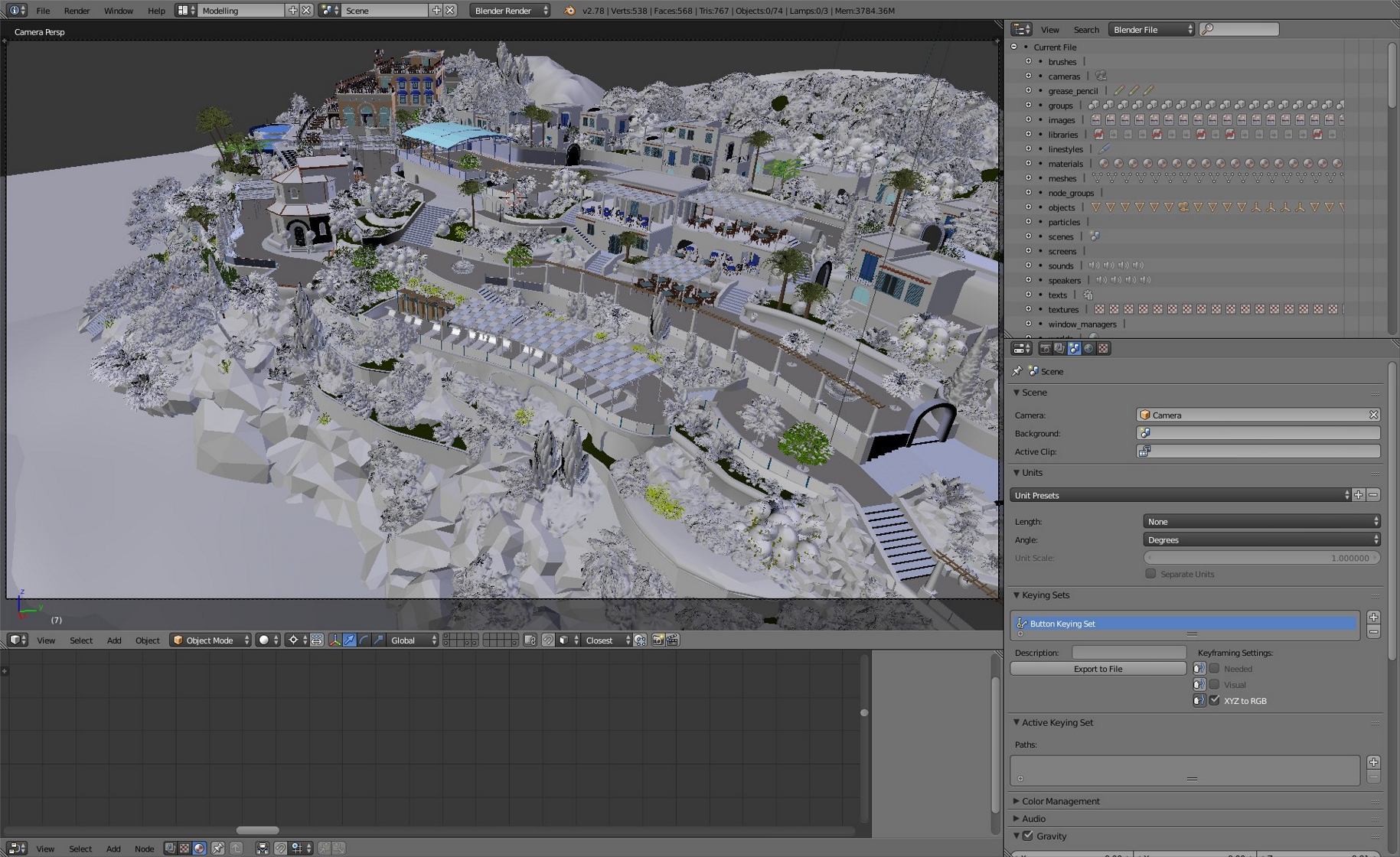 Figure 9. A screenshot of the scene in Blender (solid mode).

The next big key object in the scene is the church. This object is complex in the sense that it occupies two levels simultaneously, so we had to harmonize it with the space around it. For example, we have integrated multiple levels with greenery planted on them.

The stairs near the church stretch from the beach to the bus stop. At the top, near the bus stop, a street with a bar and residential area is located. All these objects are still under development, so we shall not focus or attention on them just yet. 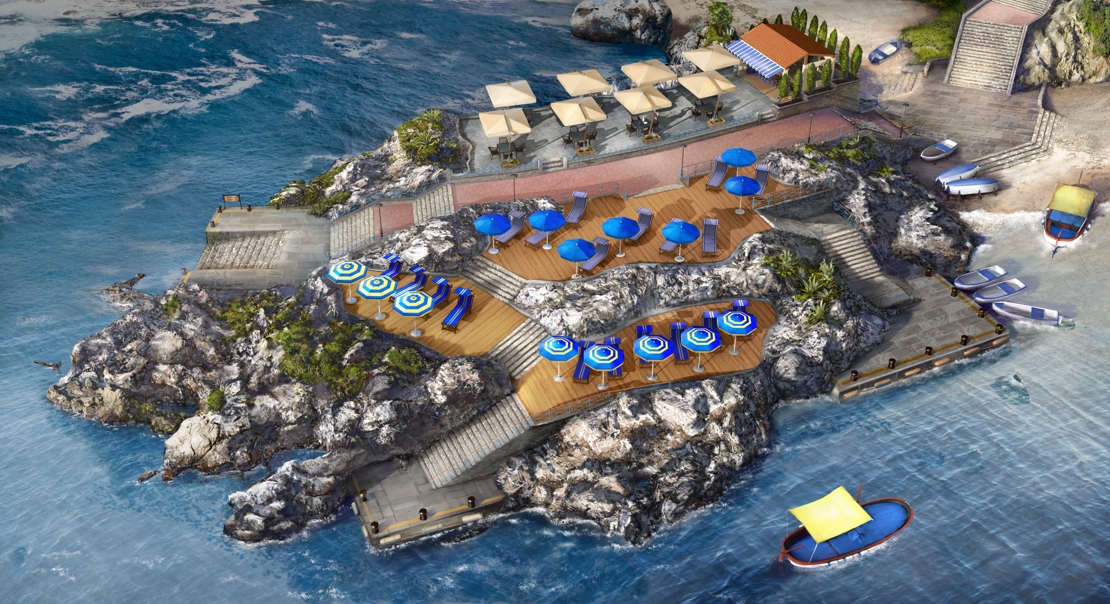 Figure 10. A concept painting for the rocky reef.

And at the bottom, the beach is connected with another area, the rocky reef. This is the very first area that a player will see. The Suzanne Cafe is located there (you can see the concepts for its interior in figures 12 and 13), and there are street parasols and tables with chairs onsite (figures 14 and 15). This area is also already complete, optimized and works perfectly in the engine. 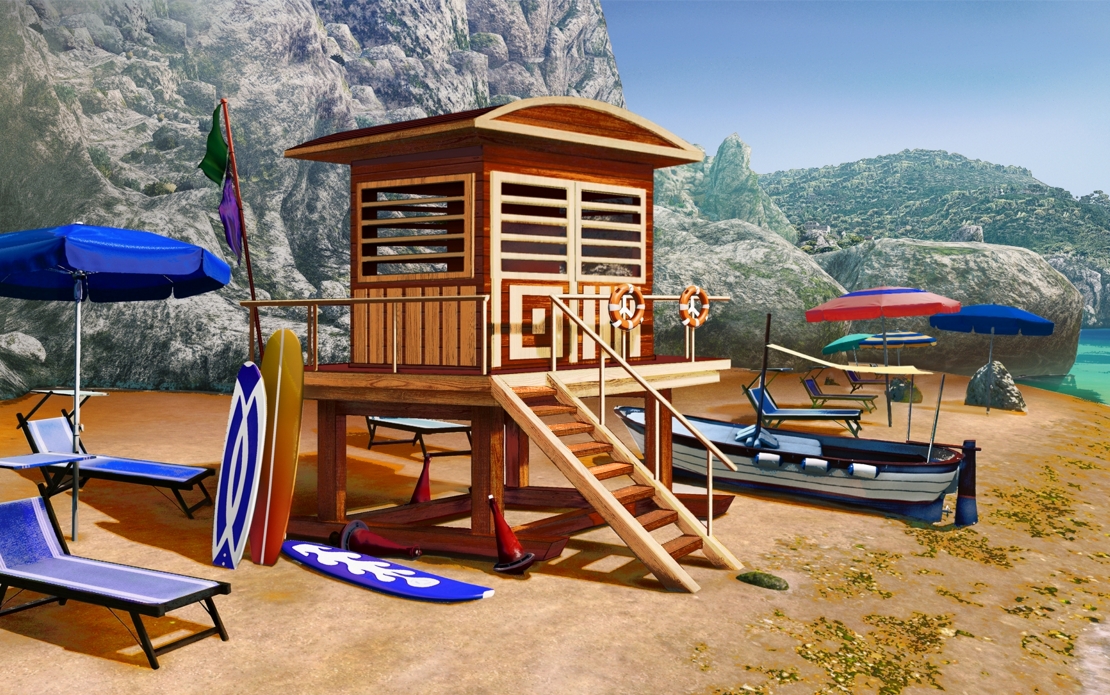 Figure 11. A concept painting for the rescue booth on the beach. 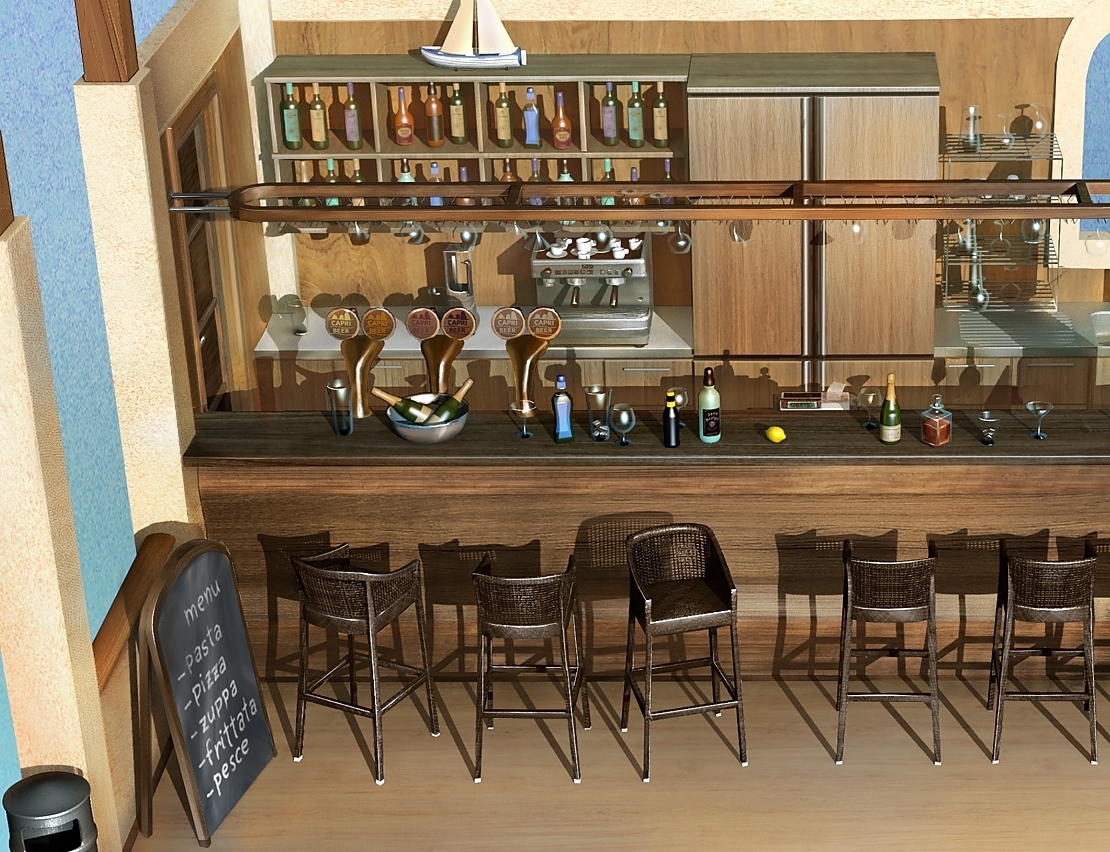 Figure 13. A concept for the Suzanne Cafe interior (detail).

Figure 14. A concept for the parasol and the furniture in the Suzanne Cafe. 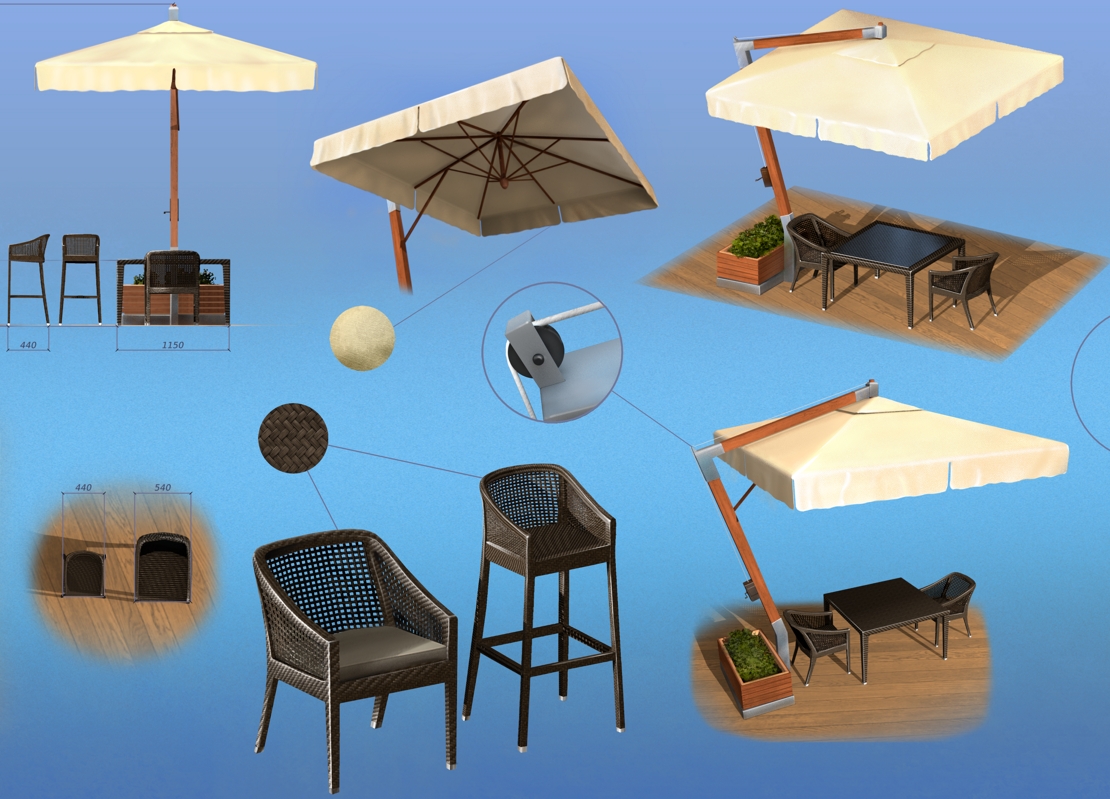 Figure 15. A concept for the parasol and the furniture in the Suzanne Cafe (detail).

And I also wanted to make our Capri very green, with lots of vegetation. After studying the Italian and Caprian plant life, I’ve made more than 30 plant prototypes with variations. A plant prototype is a textured 3D model with a relatively high polycount that is used to fill a certain volume in the scene, as shown at the Figure 17. You should not make the plants too abstract, even prototypes, as they will leave a different impression. Plant prototypes should closely resemble original plants. 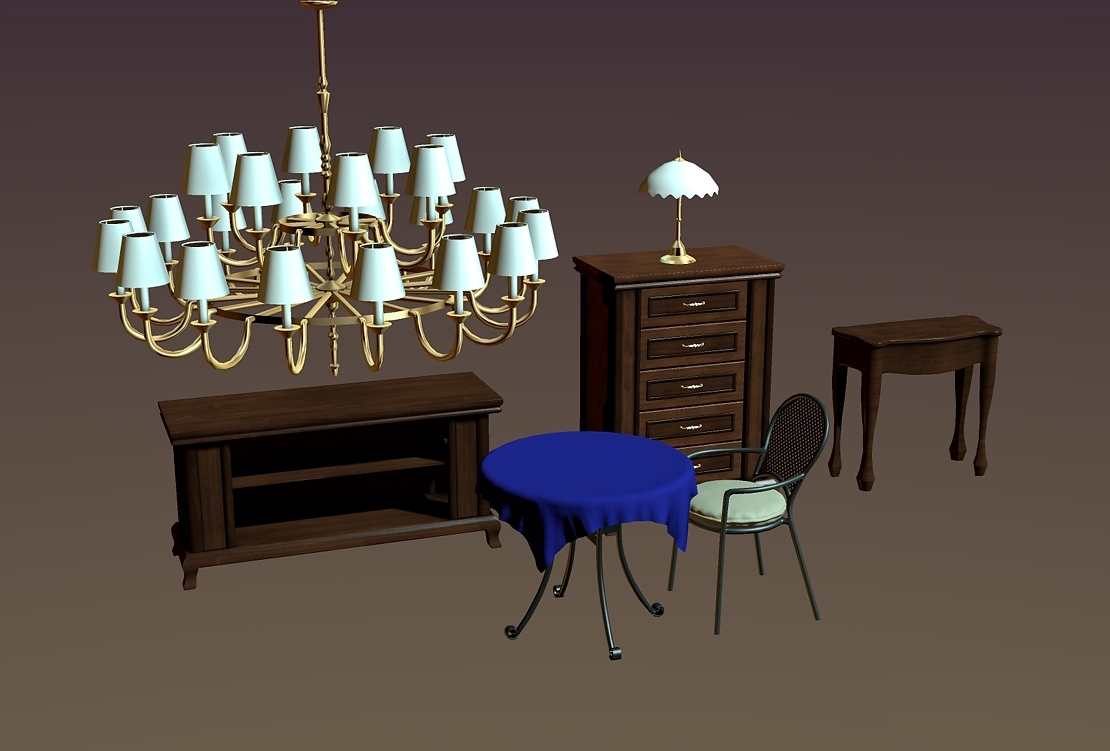 Figure 16. The furniture in the Krita Hotel (Blend4Web screenshot). 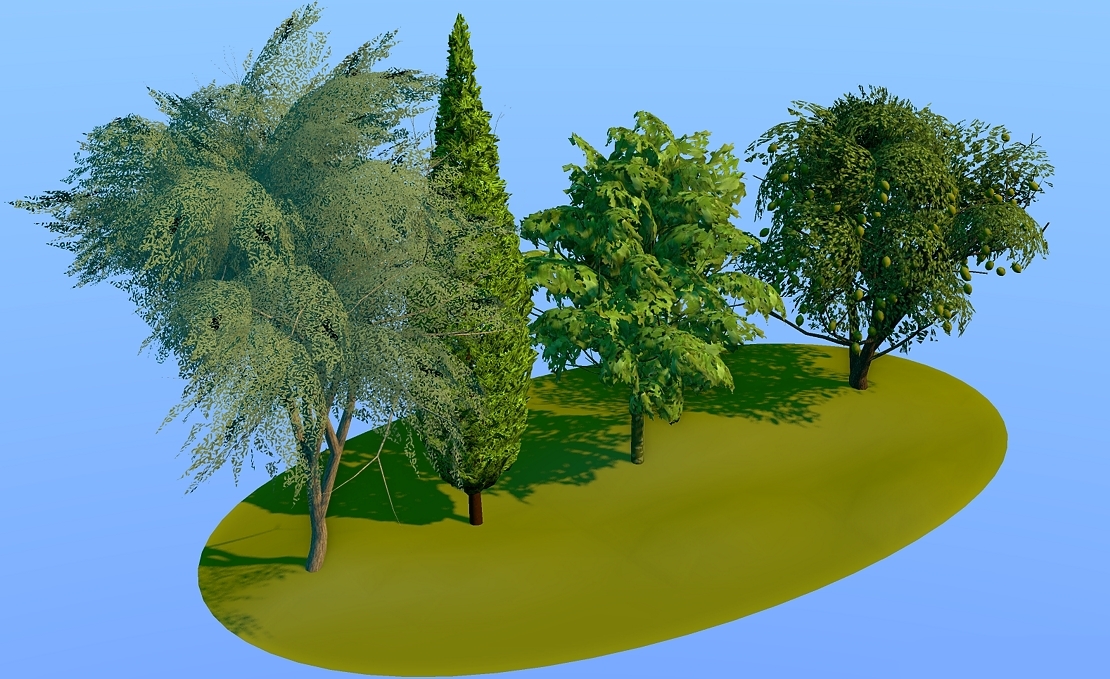 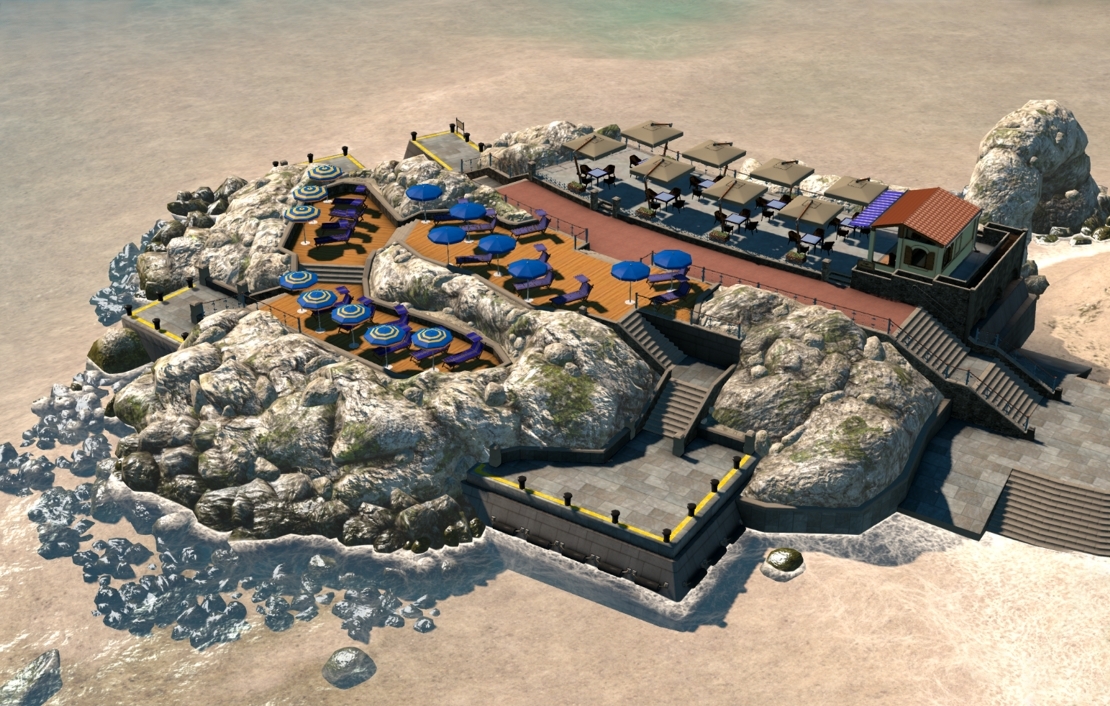 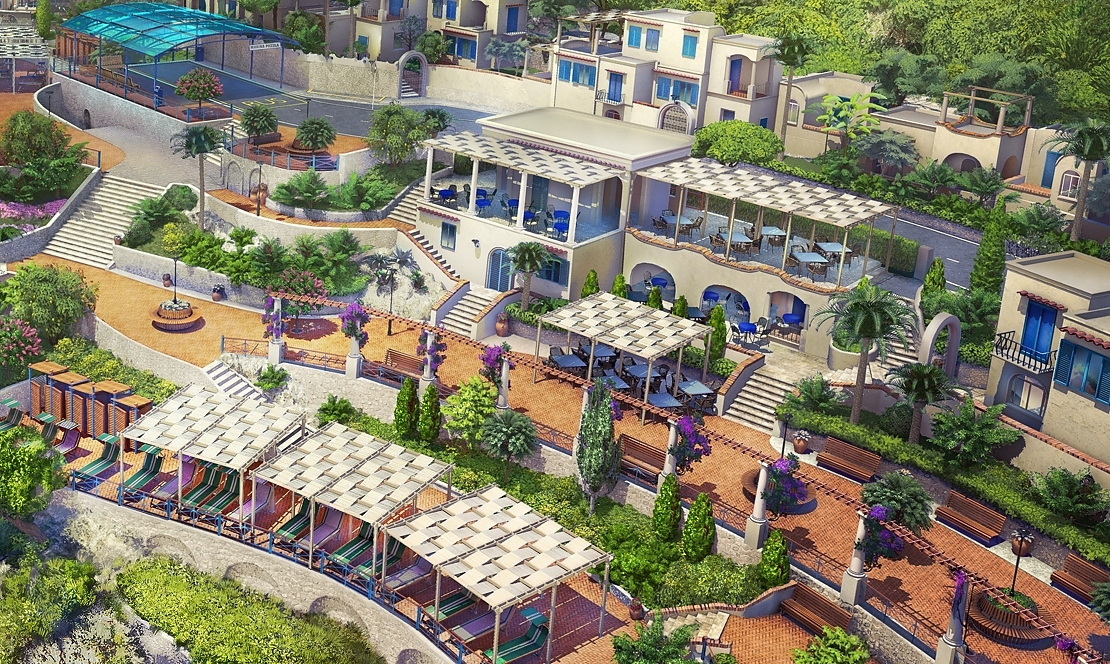 And that’s all I have to say about Capri for now. I’ll try to write a new article as soon as I finish with the street architecture. This future article will cover modular architecture construction and creating landscapes with vegetation.

Thank you for reading! 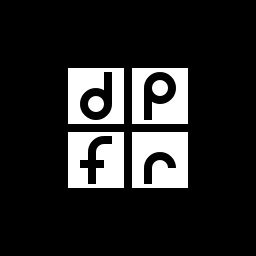 Man, hadn't seen this in a while, this is getting more and more beautiful each time.

You should totally make a first person game with that beautiful setting.
You know, typical Hollywood cheesy action story. A mandatory paradisaical location, lots of VIPs, hostage situation, you go in alone, stealth style, save the "beautiful president's daughter", then guns blazing and save the day 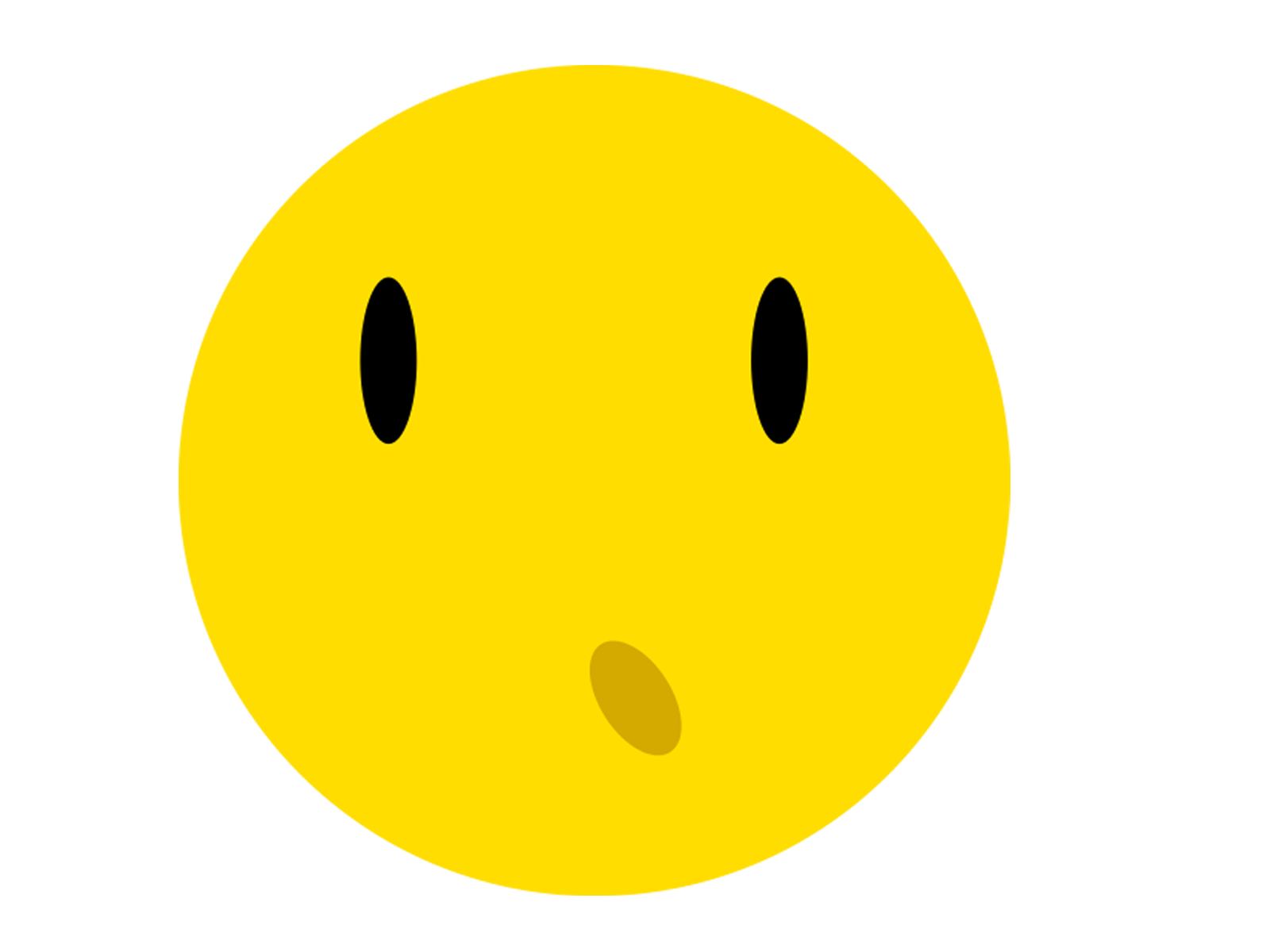 Reply to post of user Duarte Ramos
Man, hadn't seen this in a while, this is getting more and more beautiful each time.

You should totally make a first person game with that beautiful setting.
You know, typical Hollywood cheesy action story. A mandatory paradisaical location, lots of VIPs, hostage situation, you go in alone, stealth style, save the "beautiful president's daughter", then guns blazing and save the day

Haha, that's a great idea you got here

Thank you very much guys! I really appreciare it

This is truly a huge project. These are great locations. For a long time I did not rest on the coast of the sea. True, the other day I bought Business Class Flights to Saipan I confess that my joy knows no bounds. Firstly, this is a new adventure in my life, and secondly, I found a great company whose travel specialists have an unparalleled ability to offer the best prices in the industry. It's hard to believe, but they gave me a good discount. This is amazing.
12 jan. 2023 13:52
bedolaga

Great coastal architecture in these projects. I've seen similar architecture somewhere before, at a local resort in Gatlinburg. The beautiful outlines are reminiscent of ancient yet modern sculptures. Resting with such a design does not arbitrarily feel like some kind of emperor. And the service that was provided in the resort area, where I was, only more and more developed in me a sense of imperial rest. So if you want to relax, I recommend CLICK TO BOOK yourself a place at this wonderful resort.
14 jan. 2023 15:35
Bard Hansen