A new Blend4Web-powered configurator has appeared within the boundlessness of the Internet. This time, the users have an option to customize a Toyota Camry car.

The first impression is always the most lasting one. This, it seems, was the motto of the developer of this application. Imaging a beautiful white car, standing alone in the rays of the setting sun… although “standing” might not be the most appropriate word here, as after the scene is loaded, the camera starts to pan around it, so you could see this elegant machine from every side. 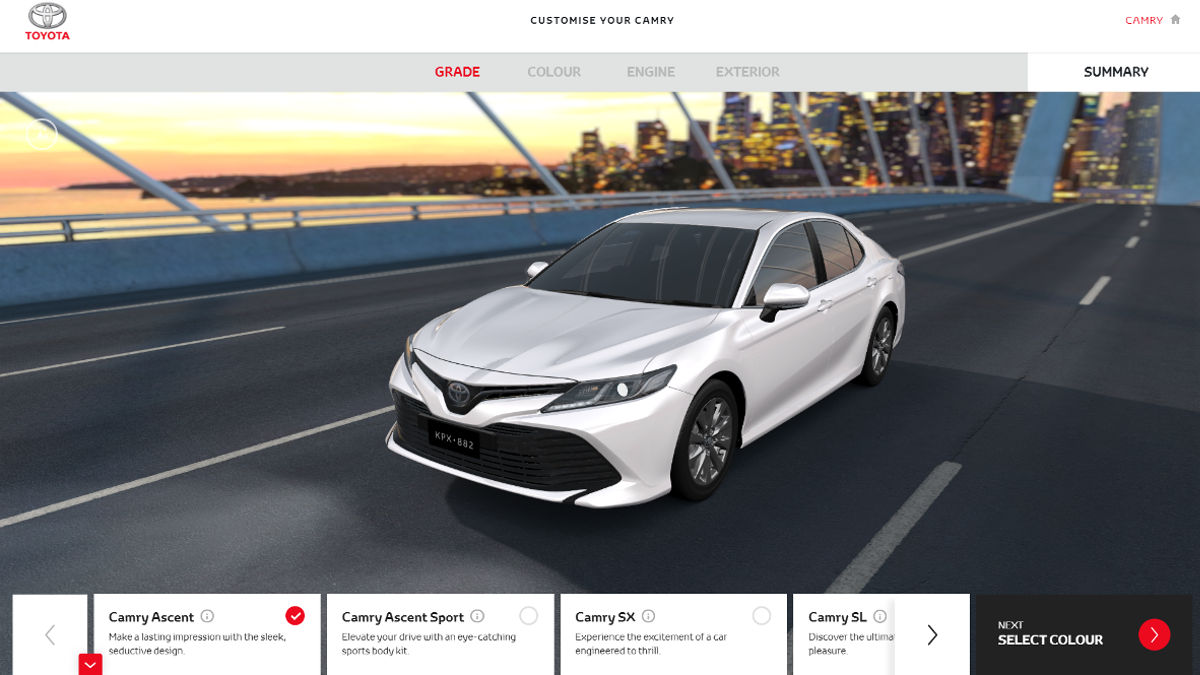 There are high-quality materials and models that help to represent real-world object with great precision. This, however, is nothing new. It’s easy to get used to top-tier visuals to the point where you start to forget that not long ago 3D graphics in a web browser was something to be excited about, especially when compared to simple flat images.

It’s time is now. Today, many companies seek to diversify their online stores with a new and aspiring type of content. But visual appeal is not the only strong point of the new technology. 3D graphics allow for making interaction between a user and an application much more effective. This particular configurator is focused on fulfilling one purpose, namely on selling cars. Its simple and clear user interface along with high visual appeal are designed to guide customer from selecting the configuration of the car to talking to a sales manager.

Customer has options to select the color for the car body, the type of the engine, the appearance of the salon. What’s interesting is that there aren’t that many variants to choose from. The application only gives you several key parameters that can vary depending on the model of the car. It would seem that the configurator was developed with model line and dealer’s technological capabilities in mind.

From a practical standpoint, this is a very interesting application. Everything is very straighforward, and there is nothing too much. Step by step, you are creating the exact car you would like to purchase. In a sense, every part of the 3D configurator is streamlined and focused on achieving a result.

Visually, the project looks impressive. 3D models of the cars are almost lifelike, the surroundings complement them nicely. For rendering the salons and for engine select scene, the developers used 360-degree panoramas and simple static images. Overall, the blending of different formats looks quite seamless.

Some features of the cars are presented in a peculiar way. Instead of dull and boring graphs and charts, the developers created colorful scenes depicting aerodynamics, sound isolation and power levels of different engine types. There wasn’t any particular reason for doing this, but it looks nice anyway.

So… I can’t even remember anymore just how many 3D car configurator were created using Blend4Web. It almost seems that they are being cranked in quantities unimaginable and spreading to the car manufacturer web site equally fast. This is a trend, it seems, and this trend indicates that web developers have high opinion on our engine.

Link to the application

In the course of his zoom meeting speak to with the Buffalo media, brain educate Sean McDermott recognised that this COVID-19-afflicted offseason is altering requirements for incoming totally free brokers and inexperienced persons who aren becoming the convenience of a natural offseason orientation https://www.bbteamstore.com/Tyler_Kroft_Jersey-43. would say individuals are the men, that neighborhood, that training course, as effectively as the veteran absolutely free brokers, however within just distinctive the newcomers that are contemporary in the direction of our soccer staff, it a significant year uphill climb for them, mainly because not just do they not recognize us, yet they don realize our packages, our techniques,stated McDermott after requested what the course of action experienced been including for his staff members doing work with novices. hen upon best of that, oneself communicate over transitioning in direction of daily life within just the NFL. That a entire other software that wee tried using towards be upon stage with within just Buffalo in this article with our enhancement workers https://www.bbteamstore.com/Zach_Olstad_Jersey-16, and the range of season that they pay out inside of supporting these kinds of youthful adult males changeover in the direction of existence in just the NFL. As a result it been a situation, and I feel merely information in the direction of that includes been the initially stage.cDermott went upon in direction of chat with regards to ingesting reasonable benchmarks.e incorporate towards additionally then be reasonable with probably what may be their contribution issue https://www.bbteamstore.com/Duke_Williams_Jersey-51. Wel look at, early upon within special. Therefore feel, there may perhaps be a possibility that if we don appear back again till working out camp, wel watch where by that goes, yet if we don, that there basically in essence 6 months, and wee actively playing a accurate sport that counts. What realistically and neglect newcomers, by now I chatting the entire staff, what realistically as coaches, can we count on our avid gamers toward do, and take very good at in the course of that year? There constant discussions and wee bought toward be at our at our least difficult as a education employees and as an company as we transfer ahead.t is in a natural way a Fantastic point that the Buffalo Expenses are pondering concerning and accepting the truth of the matter that the staff members will not be as positive at all the things they have to have towards be since of the adjustments designed in direction of how they are making the most of the offseason. It will be intriguing in direction of check out what that appears to be like together with upon the industry occur 7 days 1 and how vanilla elements appearance in contrast towards what wee discovered at the starting off of past seasons Cole Beasley Jersey. 4 Expenditures highest heading towards be traded right after exercising camp Beane likes in direction of get draft selections instantly right before slice-down working day What in the direction of count on as Costs gamers start off reporting in the direction of doing exercises camp We demonstrate what developing currently and this 7 days Jacob Lindsey Jersey.