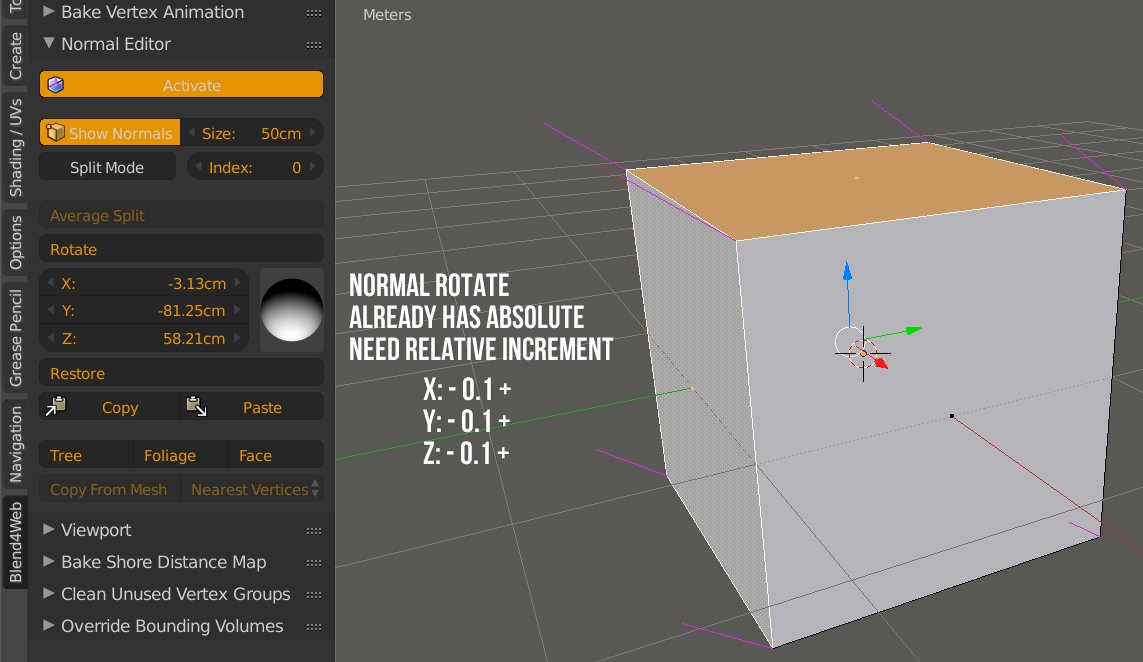 Could you guys add relative normal rotation?
Most of the time it's faster & more accurate.
Tab X+ times and done.

I have used the SoftImage normal transfer plugin, with the relative rotation makes normal editing really quick.
You start with the base normal and you edit base on that.
https://www.youtube.com/watch?v=iH3p8N7qbv8

Thanks in advance!
#10884
Alexander Romanov

posts: 7
I have tried that.
Hard to use, since there is no numerical input after pressing X/Y/Z.

Relative is easier to understand.
The basic workflow is like this:
1. Normals are default, some parts already have good reference normal
2. Base on the default you'll tweak (+ or -) it either X/Y/Z rotation

Compared to absolute:
1. Default normals
2. Change in absolute values, the normals jumped/snapped to rotation, the problem is here.
How many from default have you changed it?
I cannot repeat the same change on other areas.

Previously, there is an add-on that has this feature, LINK. It was a blast to use (since it copied User Normal Translator plugin for SoftImage). However, it is not maintained anymore.

Also I'll be using normal edit in my upcoming course, it is relatively harder to explain b4w's normal editing compared to the SoftImage's plugin or the no longer maintained add-on.
#10891
Alexander Romanov

posts: 525
Thanks for your response!
Our artists need more accurate normal editing as well. I will work on this feature.
Alexander (Blend4Web Team)
twitter
#10894
LightBWK

posts: 7
Thank you very much!!!
The artists from BNPR FB group will love this if they get this news.
I'll keep it hush for now.

posts: 7
Am inquiring how is the normal editing tools coming?
There has been a sudden development.

I got involved with an anime production with a famous Japanese studio (which I cannot disclose yet).
Normal editing is a major part of the workflow.
Some how we need a normal editing tool within 2 weeks (before September 11th).
For further details, you can PM me.

posts: 525
We have made some improvements and bug fixes. You will be able to try and test this new functionality in developer preview, which will be released soon.

posts: 7
Thanks, you are a life saver.