Terraces - this is what we call the small area of the scene at the beginning of our demo application. It has multiple levels that will allow the player to climb on the island. From there you can get a great view of the sea and the whole island. 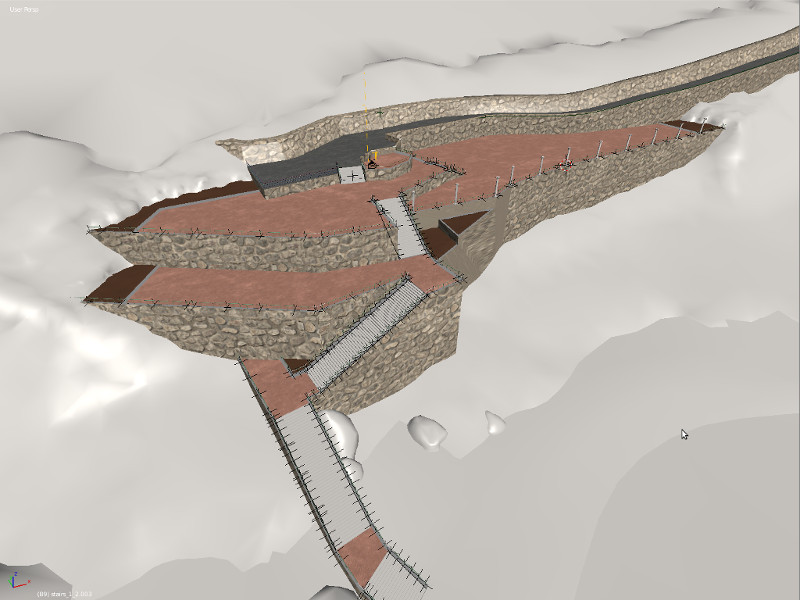 This is what the area of the terraces looked like after creating a base geometry. The geometry of the craggy rocks of the island also looks completely amorphous. 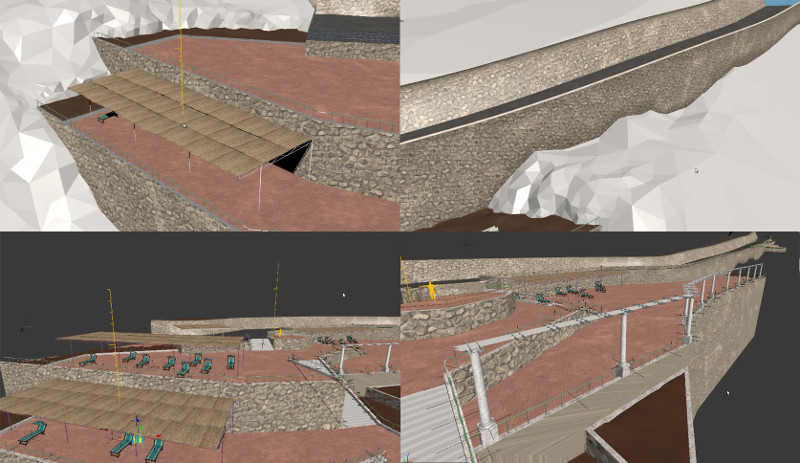 The next step was to add tents over loungers and columns with trellis for climbing plants. Then walls and fencing were modified and other small parts were added. 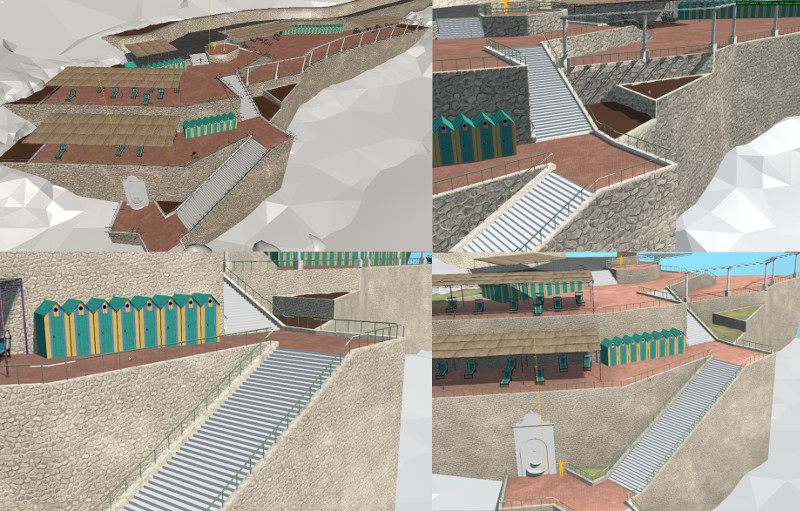 Then we finalized the materials and added small items: the cabins (we cut them in the final version), the surface of the earth for trees and grass and basic geometry of the small fountain.

The texture of the stairs was completely made in Blender by baking different passes from high-poly geometry. And then it was applied to the geometry of the steps in the Terraces location. 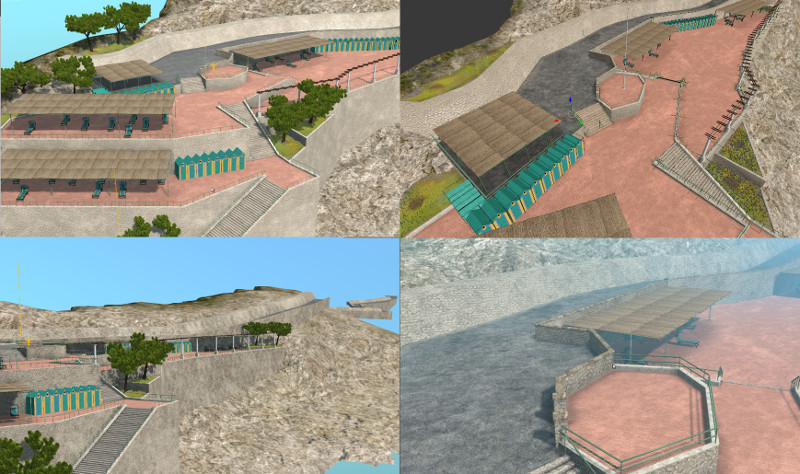 With the addition of these details the location had acquired a more finished look. It existed in this version for a very long time until the additional concepts for the area were made.

While working on the concepts, it was decided not only to modify existing geometry of the buildings but also to diversify the location with additional large objects such as a boat station, a lifeguard tower, a bar and decks on the small plateau in front of the main staircase. 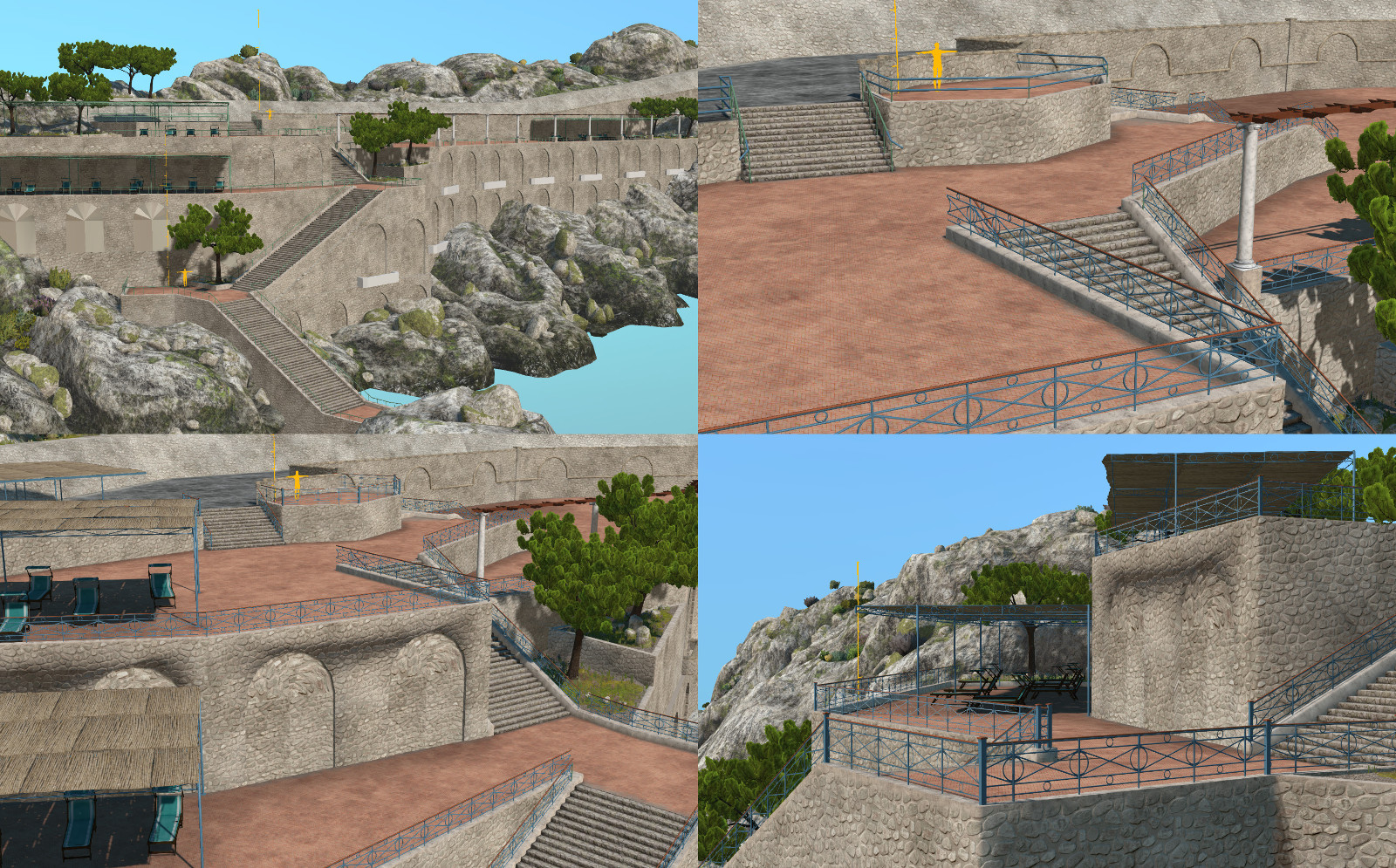 Arches were added on some of the walls. The railing and its color was also modified. Some additional terrain plains and hanging planters with soil were added.

Now we are actively working on the area towards increasing the amount of details of the large geometries of the walls and improving the geometry of the surrounding terrain.

A lot of the geometry in the scene has modifications of vertex normals. Due to the fact that the new release candidate of Blender is out (which has a new modifier for vertex normals) we decided to make a short video comparison of two vertex normals editors: the version implemented in the Blend4Web engine and the new Normal Edit modifier from Blender.

The result of the modifier's influence on the geometry is not supported in the current version of the Blend4Web engine, but in the future we plan to combine Blend4Web vertex normals editor and Blender Normal Edit modifier.

As always you can leave your comments about the article on our forum in this post.

Thank you for your attention.

I love the design of the magazine, it's very simple but still very effective. The cover is very beautiful, and it has a nice color scheme. The layout of the magazine is very good: each section has it's own theme, yet they are all related and together they create a coherent whole. Go to Managed Service Provider for best services. I've been thinking about making terraces for my garden, but I don't have the time or money to do so. This project sounds like a perfect opportunity for me to learn how to make terraces quickly and efficiently.