In these final days of the year 2017, there is snow on the streets, countless people rushing to buy everything they need for holidays, and yours truly – sitting at his computer writing the text you are now reading. The departing year has brought us many news and many interesting features implemented by the developers of Blend4Web. So, let us just for a moment put aside all this new year fluster and look back. 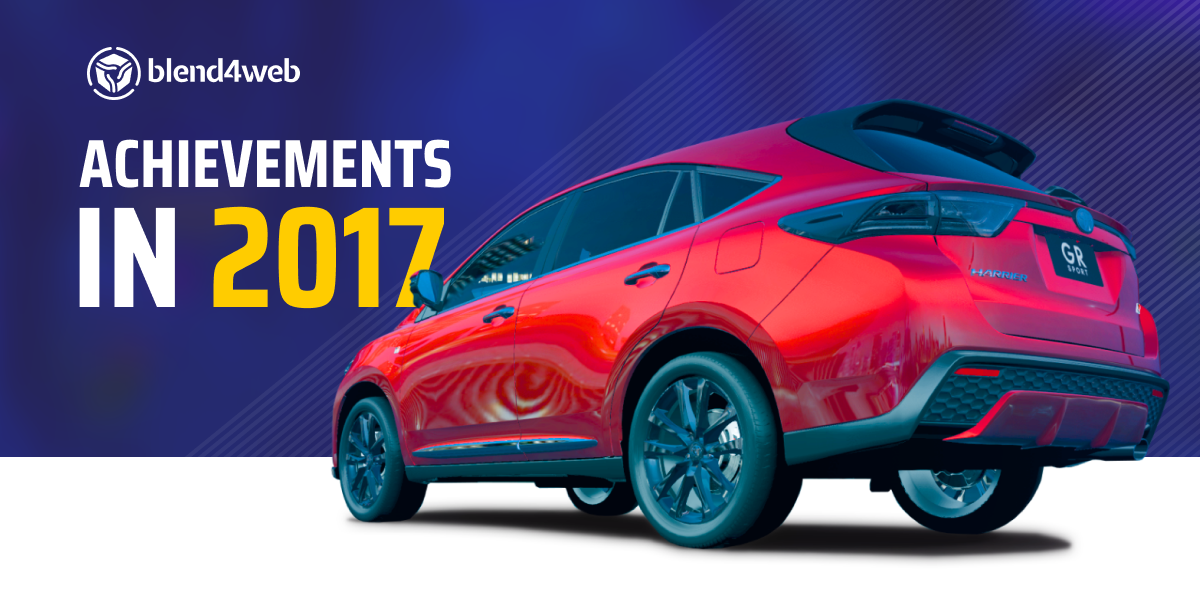 This years was exceptionally rich with product configurators made by various companies, from small-scale studios to world-famous corporations. At times, it almost looked like the world has gone insane in its attempt to conquer 3D graphics and to replace simple photographs and videos with impressive 3D scenes. Every month several new ones were released. We wrote about some of them in this blog, but even more were left behind. Anyway, why don’t we recollect on some of the most interesting configurators of this year? 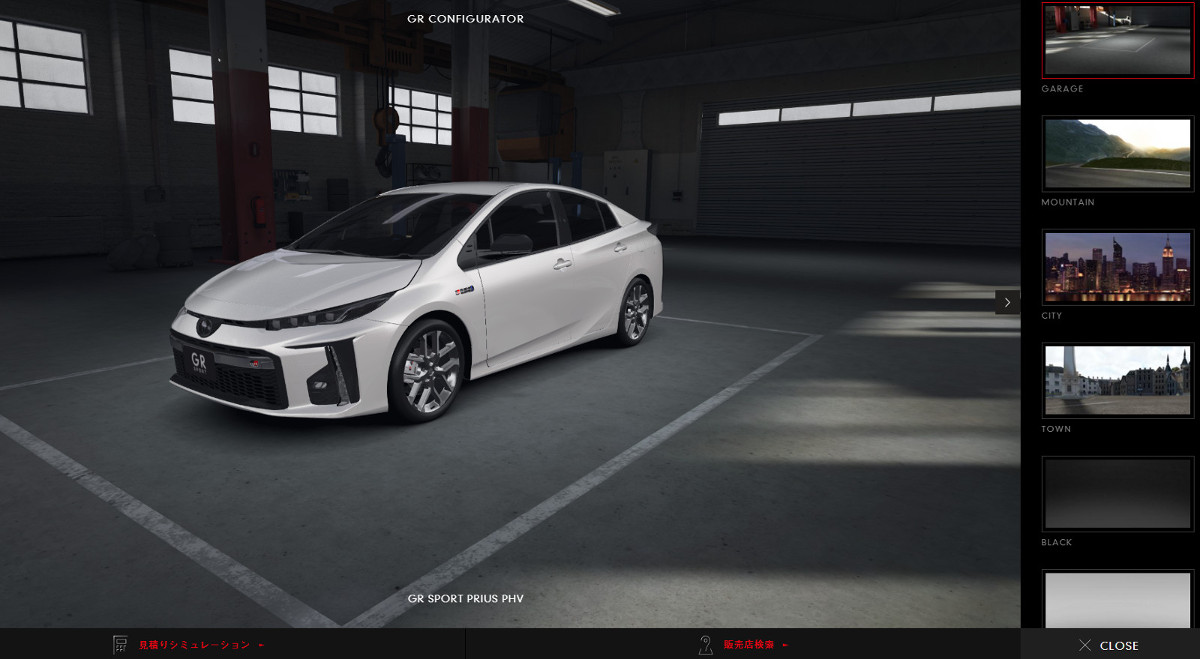 Toyota Motor company brought its customers not one, but two 3D applications for car tuning. For example, a most fancy tool for supplying a car with all kinds of bumpers, spoilers and other add-ons was published on the popular GAZOO Racing website. The developers of this app paid extra attention to backgrounds, which are done as real 3D environments. I strongly advice you to follow the link and explore this project for yourself. I’m sure you’ll like it! 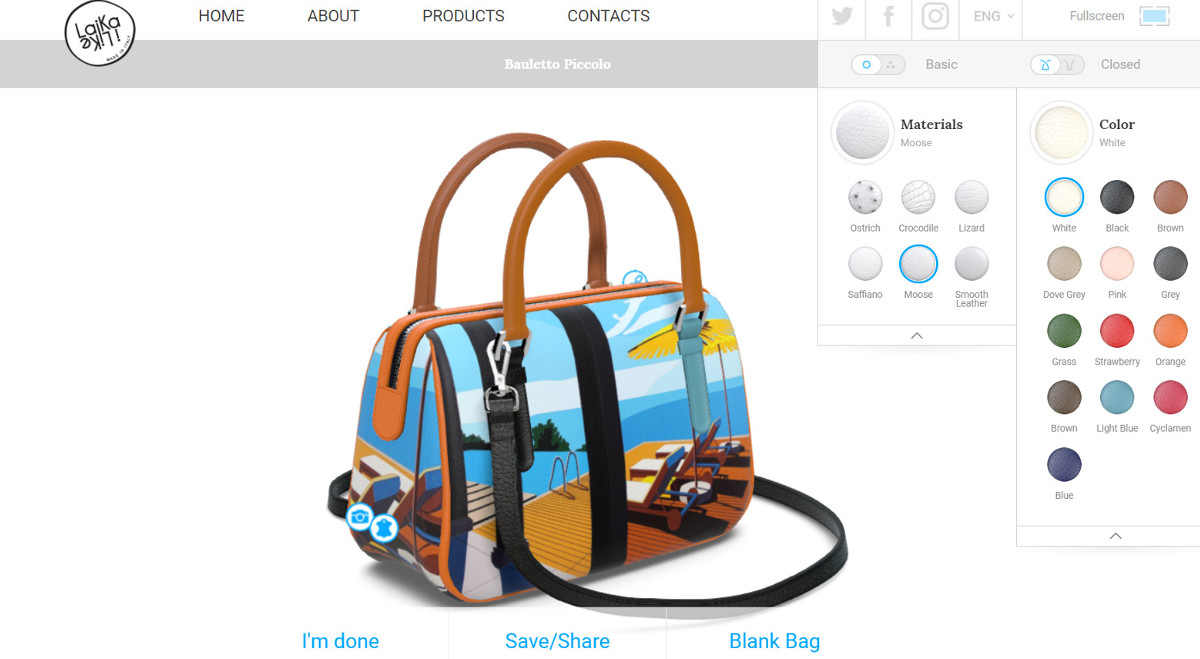 And here we have a ladies’ handbag configurator. It might seem relatively simple at first, but if you examine it closer, you’ll surely notice some extraordinary options that it includes. I won’t say a word about its visual perfection (although I really like to do this, everyone who read my review would agree), instead, I’ll concentrate on the functionality. There are a lot of options that you can use to make your own handbag look truly unique. For those of you who prefer to be in complete control of the situation, there is an advanced mode with even more settings. Even more impressive, however, is a built-in image editor that allows for creating something truly unparalleled. Considering all of the above, I would say that this application is definitely worth checking. 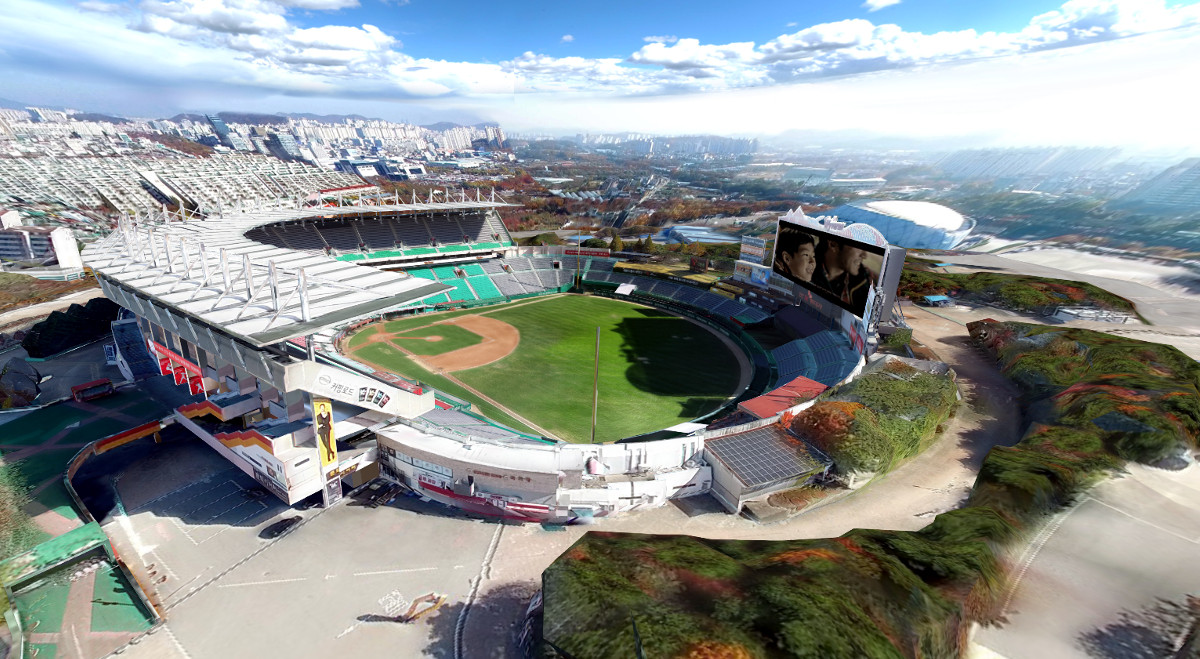 I also simply cannot overlook the next presentation, even if it’s not really a configurator. Korean artists recreated an entire sport complex in 3D! The scene itself is amazingly massive, and its bright and saturated colors look really impressive. I’m not really familiar with Korean language or writings, but if you click various entries in the menu, you’ll see that the application gives you options to build a route to a specific place of the stadium, to examine its inner structure and to see it from different viewpoints.

But that, I think, will be all for our little review of Blend4Web applications made in the 2017. If you want more, feel free to browse the showcase on our website. We, meanwhile, proceed to highlight technical achievements.

Get Ready for VR/AR!

This was also a year of supporting high-tech devices, as this was the main focus of the Blend4Web development team in 2017. Almost every release featured some brand new toolsets for various virtual reality devices, including some very peculiar ones.

Here is one of the Blend4Web team programmers at his workplace. It may not look like it, but he doesn’t actually perform a ritual for some programming god. No, he simply shows us how to use Leap Motion controller. The little box you can see on the table is actually a device that captures hand gestures and movements, while Blend4Web translates them to 3D animation. It’s easy to imagine many tasks that would benefit from using a controller like this – and our engine is already supporting it.

The next example of AR in action is just as interesting.

As you can see in the video, Augmented Reality is a very specific form of using 3D graphics that combines computer-generated visuals and real-life environment. Soon after we added support for this technology to Blend4Web, YouTube was filled with clips showing developers of all kinds doing questionable (I really can’t think of a better word) thing with AR features. This curious toy can, however, find many uses, as augmented reality is able to show familiar thing from an unexpected angle. You can already find some commercial projects that use AR and VR.

Blend4Web was always popular among creative crowd that likes to show their achievements in blogs and web sites but isn’t very familiar with concepts like “JavaScript”, let alone “compilation” and stuff. Our renowned visual logic editor was intended for them, at least at first. You only have to perform some simple actions with nodes in Blender window, and your scene can react to user input.

With every release the developers of the engine add more and more features for creating scene logic. Now, it can use multiple threads, include dedicated functions, interact with JavaScript code and system time. Logic Editor becomes a powerful instrument well suited for creating very complex behaviors.

For most of the year, the developers of Blend4Web engine were climbing the mountain of the photo-realistic rendering engine called Cycles that is already eclipsing familiar Blender Internal. And their efforts finally start to pay off: most of the Cycles materials already work in real time without any major alterations. But this is not all. Here, ladies and gentlemen, is a true Christmas present: Physical-Based Rendering! 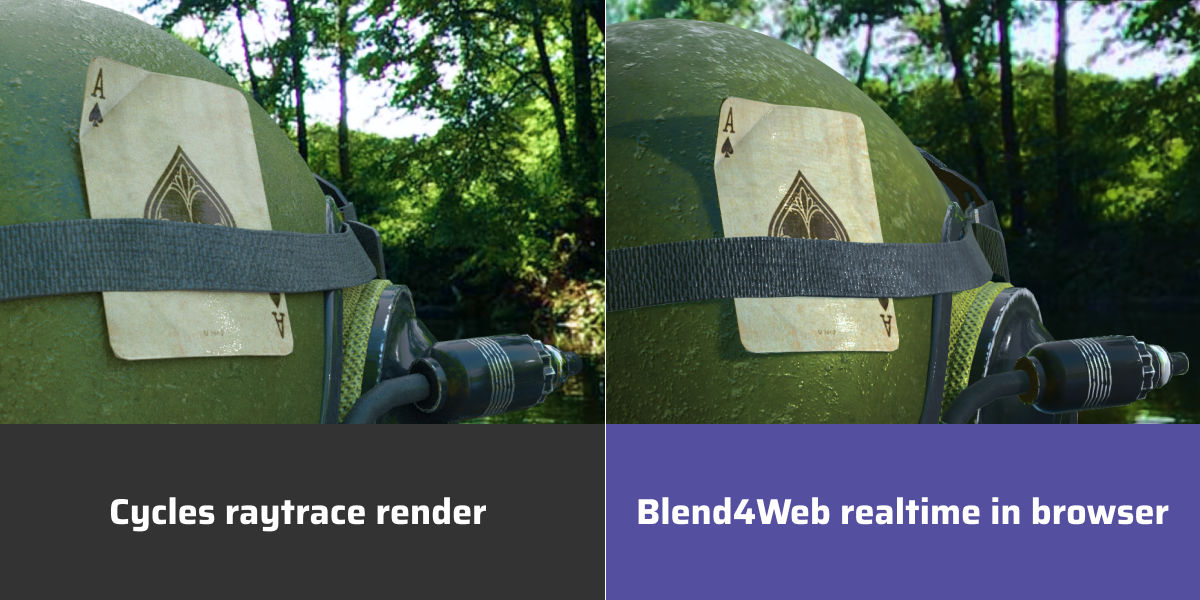 It doesn’t matter if you aim for photorealism or like beautiful things or simply don’t want to spend too much time preparing your scenes – in any case, here is exactly what you need. One single supernode that gives you simple and convenient setup as well as an easy way to create a photo-real image in a web browser window.

Blend4Web 17.12 will be released tomorrow, at the final work day of the year. It will include long-awaited PBR material support and a few surprises for programmers. I hope that everyone will find something interesting in the new release. And be sure that new 2018 year will bring many more exciting features for Blend4Web users.

Each course is crucial and read about the 5 Advantages of Pursuing Public Relation Course, you will definitely understand that it will change your life, many people use this course
18 aug. 2021 11:35
proflevin

+27833928661 Minerals land gold Agency Limited is a professional mining company licensed and legally operating Worldwide. We have been in the mining business for over 20 years serving numerous clients from all over the world. We deal in mining and trading of precious minerals and also offer logistical and consultation services to our clients. We can supply monthly quantities up to 1500 Kg of Gold. We offer our services as International agents and consultants to our clients. As advisers we study price movements in the global and regional markets, product trends, and conduct significant research on statistical data. valuable information helps our clients in taking prompt and strategic business decisions. Our major strength lies in our knowledge of the global mineral commodities market which we have gathered over a period of 3 years. Presenting our clients with different business opportunities from all corners help expand their product portfolio which would enable them to remain competitive in every market. Our ability to correctly and promptly assess global market psychology gives us the edge over our competitors. We also provide our foreign clients with comprehensive information about our local markets and also markets worldwide. We are involved in all the stages of production that is: mining of the ore, smelting, packaging, exporting and importing, mineral brokerage, shipping, clearing and forwarding of the minerals.