posts: 57
I do realize that the phrase: "the idea that anything could happen in the background" might give developers nightmares; but as an artist, I always look for the greatest potential . . . .

posts: 57
True, I guess I was just liking the idea that anything could happen in the background. I like the idea of having a ground shadow that can have anything behind it; whether that is an image, a video, or just a way of animating color changes, it just seems like a nice easy way (in theory) to have more freedom and control over the way a scene interacts. (And could also be overlaid over non-Blend4web objects.)

Perhaps I don't understand a current workflow that would replicate this scenario:

Having a simple ground plane that will catch ground shadows; but not have any visible area where it shows an edge/horizon etc. I know that it is possible to create an environment half dome with a truncated area where the dome changes into a ground plane; though it still looks stretched and a little forced.
#18226
mcolinp

posts: 57
The upcoming release of Blender will include a new feature known as "Shadow Catcher" which can be applied to objects that are unseen other than the shadows cast on them. This is often used for product placement where the product needs to cast a "Studio scene type shadow" with an alpha background to composite over a scene image or a simple background color. The coming feature is part of the Cycles Engine.

I am hoping that this functionality could be implemented in Blend4web.
#18166
mcolinp

posts: 57
So I'm currently using the NLA editor; what I don't understand is how to create modular animations that are not all part of a single animation timeline. So I would like to "store" or "Save" the current animation. Then start fresh on a different animation that doesn't necessarily include the previously developed animation. Though once they are all finished; I might combine them or overlap them.

Is making a new "scene" the best way to separate animations? If so; can they be combined using the NLA editor at a later point?
#18155
mcolinp

posts: 57
There would ideally be multiple actions overlapping; which would be several objects changing "location" to reveal hidden or overlapping parts (Consider this one of 3 animations). But there are separate areas that should have their own animation; while some animations could include sub-antmations. So a way that I can run all animation (about 3 total); or run them Individually.
#18133
mcolinp

posts: 57
I have been playing with the NLA editor to make some simple object animations. (Think mechanical exploded views; no mesh rigs.)

Being that I'm still fairly new to blender's animation features, I'm looking for suggestions as to how I would go about making multiple animations that blend4web can use.

I have briefly looked into "baking", but it seems like it only applies to atmatures and mesh deforming animations.

Would multiple scenes be the way to go?
#17647
mcolinp

posts: 57
I have been playing with making a transparent acrylic material that reflects an environment texture. I like how it looks overall; but need to have the ability to do variable emission of some kind. It seems just a bit too dark as is; and it also will have a second state of being illuminated in the scene.

I would love any suggestions of things to try; as I don't seem to be getting the result I want. 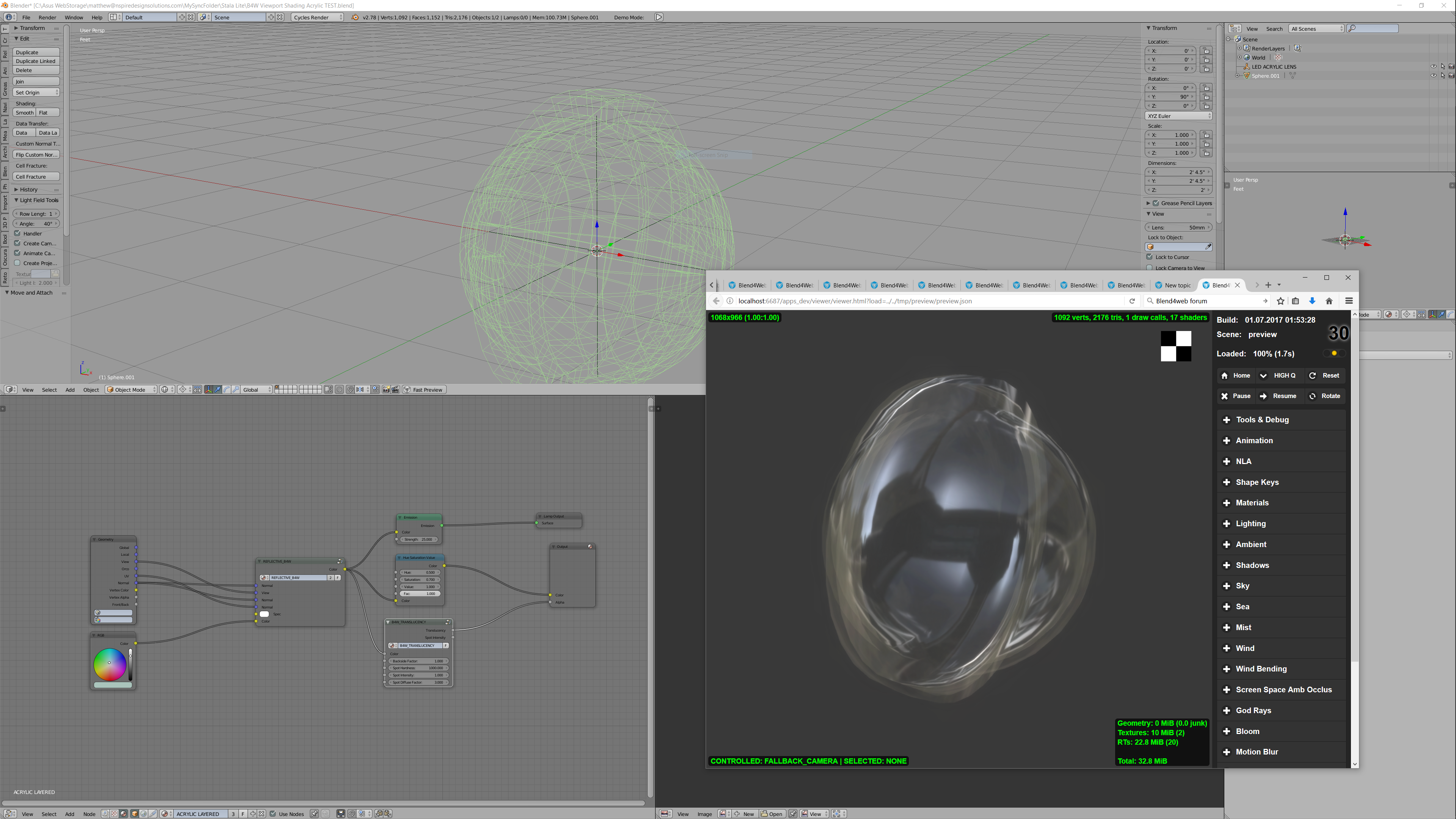 posts: 57
Brilliant! Thank You for the example. You just made my life so much easier! I now see a workflow that is simple & straightforward; that will work for most of the materials I need to create. (Though I may be back to ask for help with clear Acrylic . . . . Though I will spend some time playing first)
#17607
mcolinp

posts: 57
Thanks Mikhail, I took a look at it and it does look to still be fairly straightforward. (Compared to most other material examples I've seen so far.) I want to make sure I'm understanding correctly; that the four images in your setup are environment images used as reflection, and there is actually no "World Environment Texture" in the scene . . .


-EDIT- I just noticed that top an bottom nodes were Material Nodes; and the two in-between are Textures. So I'm still just checking that my assumption is correct that the reflections are only driven by those two images; and not the outside world environment . . . .
Technologies Blend4Web PRO Blend4Web CE Web Player WebGL Blender
Support & Services Technical Support Documentation and Tutorials Partnership Program Consulting and Training Integration and OEM
Community Blog Forum FAQ Conference Contests
Company Triumph LLC Contact Us Place an Order
© 2014-2019 Triumph