Dear customers and the Blend4Web community!

We are glad to inform you about a remarkable Blend4Web-powered project recently released by NASA. To celebrate the 3rd anniversary of Curiosity, the famous Mars rover, landing on the red planet, NASA has developed a web application to reflect the most prominent moments of this space mission. This app is both very informative and intriguing: you can move the rover, control its cameras and the robotic arm and even take a selfie! 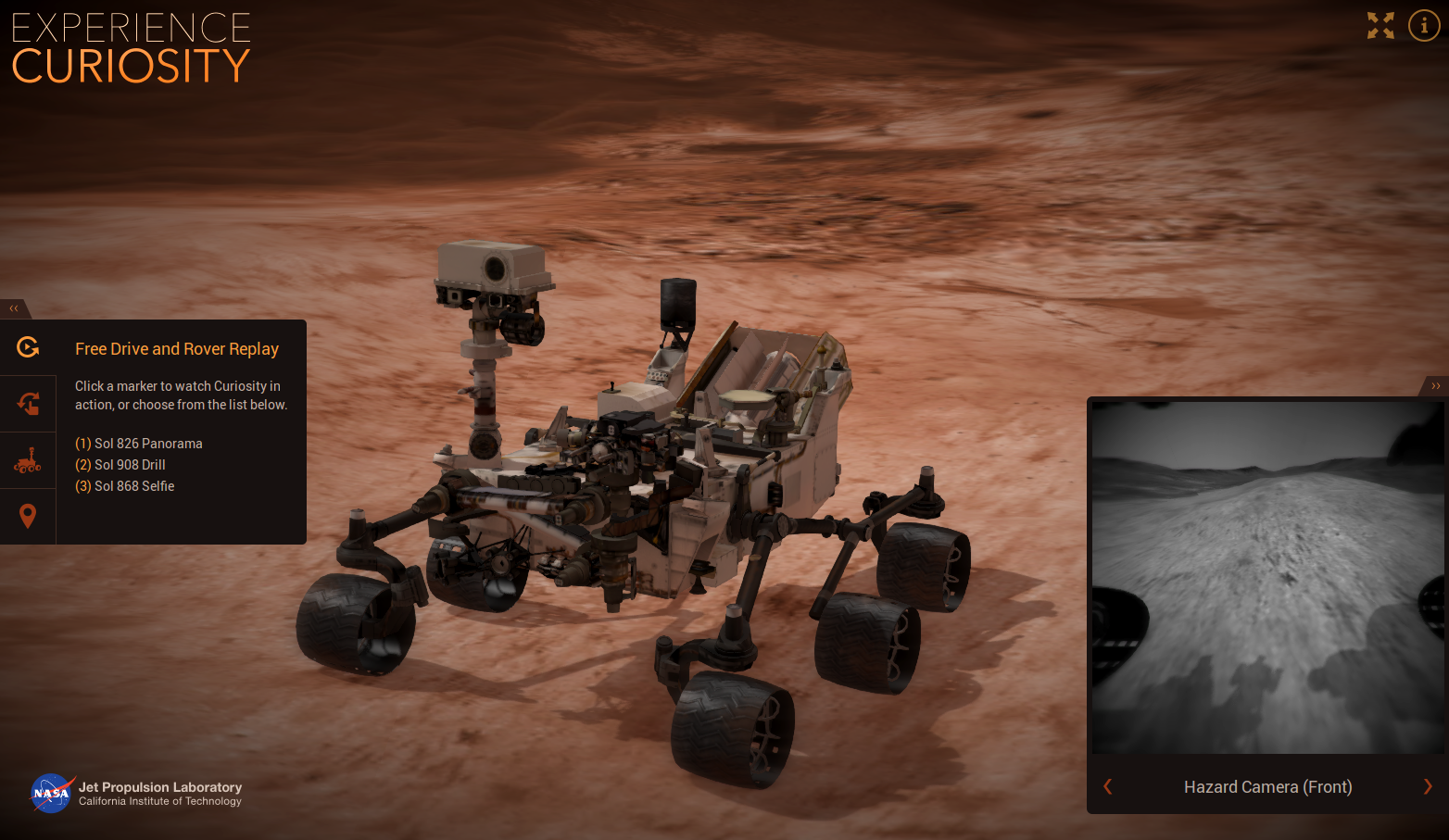 The purpose and technical specifications of the most important parts of the machinery - nuclear battery, chassis, antennas and others - are displayed in pop-up annotations. The convenience and clearness of such an approach are substantial advantages of interactive content over ordinary video clips. 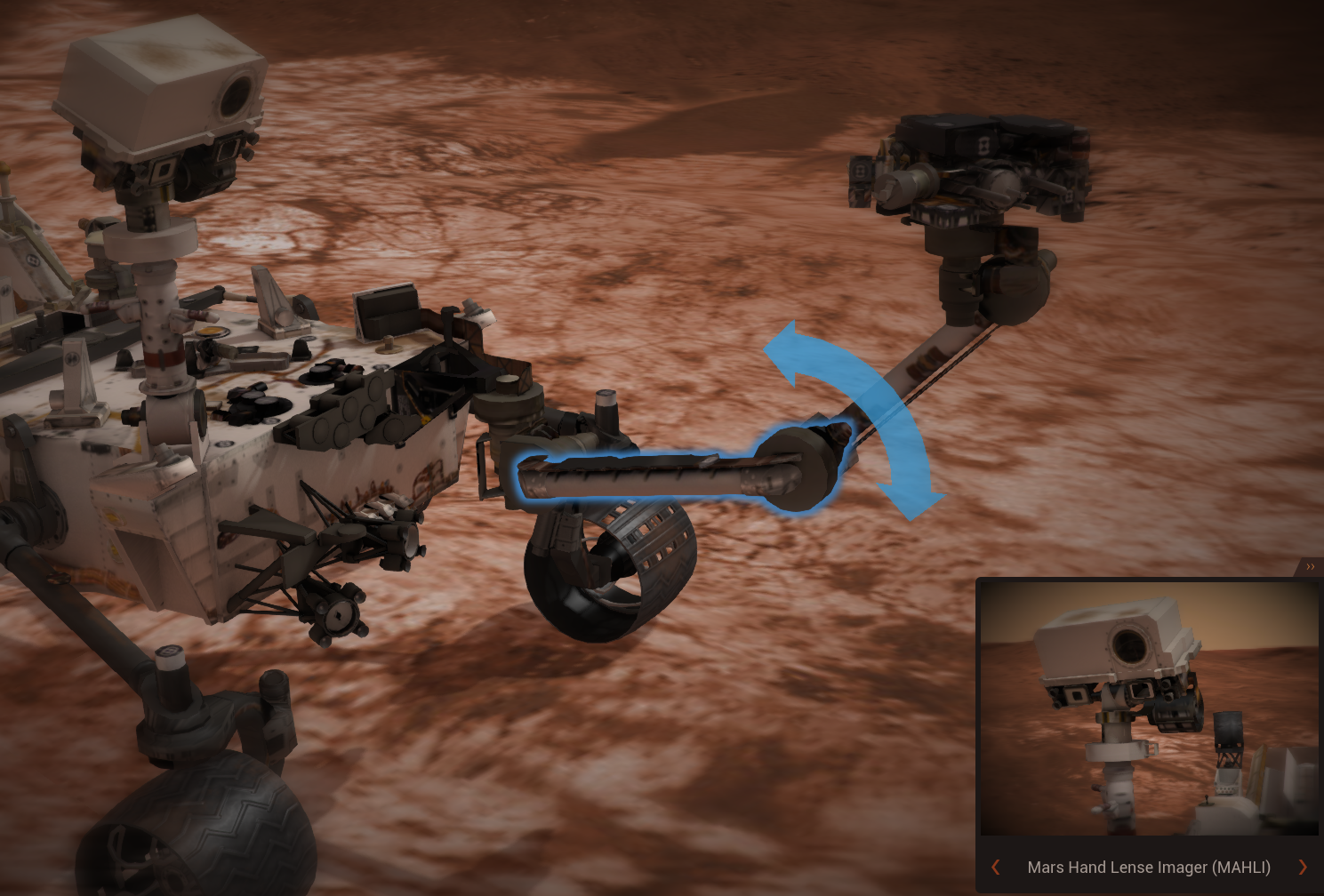 The robotic arm rigged with a percussion drill, a camera and other equipment. Click to enlarge.

The 3D content is integrated with martian landscape photos linked to locations and events via HTML interface and markers. Seamless integration of these different data types is guaranteed by WebGL as a native browser technology. 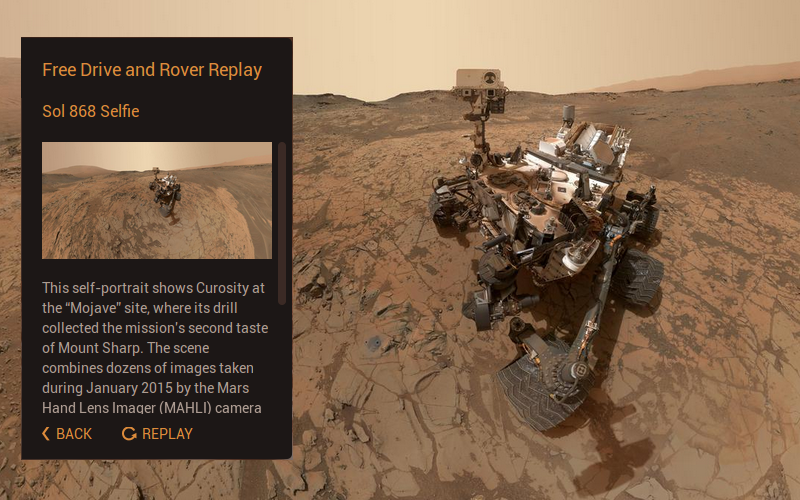 A selfie taken on the 868th martian day of the Curiosity mission.

This interative visualization works in standard browsers including mobile ones, and therefore, does not require downloading or installing any components or apps. This proves the feasibility of the web platform both for end users (3D graphics can easily be delivered to the general public) and for developers (write once, run anythere).

We believe that the successful implementation of such an ambitious project marks a significant milestone in the development of Internet technologies in general and WebGL, in particular. NASA's choice to use Blend4Web confirms the importance of the key principles behind the engine: open source, cloud-independence, integration with free and open source Blender.

Amazing news ! Congrats for this big opportunity, hope that more and more people will use Blend4Web

Outstanding, though it makes sense when one considers the awesomeness that is Blend4Web.

Wouldn't load in IE for Windows10 (sticks at about 30%), loaded in Firefox no problem.

Going to support Win10 by the next release.

I was working for Larrivee guitars when the ISS acoustic guitar was made and sent up to the space station, and now I can say I was part of the B4W community when NASA made this! Congratulations! Maybe I should get some tutorials together to help the inevitable onslaught of new users, I will soon need a fall season project to fill my time.
07 aug. 2015 12:04
Yuri Kovelenov

Would it be possible to get access to the sources of the curiosity project?
For the application that I am about to do this would be a really good starting point. The features are almost the same compared to what I want to do.
18 aug. 2015 11:39
Yuri Kovelenov

Would it be possible to get access to the sources of the curiosity project?

I'm not sure about the current plans of NASA in relation to this app. However, it may be possible since they practice open sourcing their projects a lot.

Thanks for the link, Yuri.
So I've written them a mail, we will see what happens

Actually, a little off topic, could you quickly have a look at the thread opened by me, there is an answer missing, I am waiting for… Thanks so much!
18 aug. 2015 18:37
Yuri Kovelenov

Actually, a little off topic, could you quickly have a look at the thread opened by me, there is an answer missing, I am waiting for… Thanks so much!

Thanks for the answer Yuri,
according to the answer I got from NASA they unfortunately won't support in any way, neither by supplying all source files nor by answering any questions regarding the implementation.