Lets have a look at the shader.

It is very similar to the previous one from part 1, so I'll describe only the differences.

After the offset is calculated (1) the data goes into the Maximum node (2). This node compares the two input values and returns the largest. In this case a continuous range of the interpolated values goes into the first socket (we see it as a gradient) and the constant zero value goes into the second socket. We can adjust this value from 0 to -1 to change the left edge of the stripe (3).

Similar to it the Minimum node returns the smallest value after comparing (4). We can change the right edge of the strip by adjusting this value in the 0,1 - 1 range (5).

After that the minimum value is subtracted from the maximum one (6).

Below is the illustration of what's going on. For simplicity only 5 distinct values are shown instead of a full gradient. 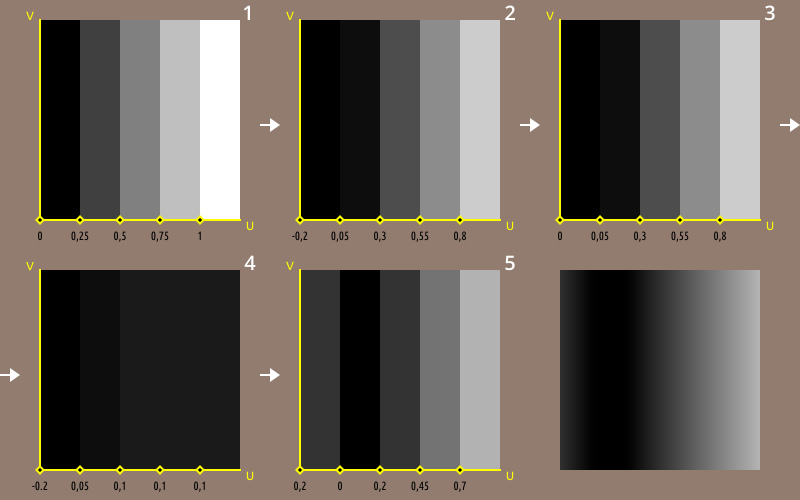 And as a result we get a stripe. For the real interpolated values we get a smooth gradient as shown in the (9) node.

The Multiply node controls the width of the stripe smoothing (7).

At the end we insert a gamma correction node (10).

You can find the source blend file in the following directory: blend4web/blender/tutorials/basic/striped_shader_2/.

[2015-09-07] A screenshot showing the material has been changed, because the special node RGB_TO_LINEAR is no longer needed: Blender now supports Gamma node.