We have several people reporting problems loading our B4W web viewer on Android with Chrome.

They have all passed the WebGL tests at http://webglreport.com/

This is an example of one our links: link

Here is also a B4W web viewer which did not load on their devices: link

This three.js viewer does load on their devices: link

Let me know if you need more information.
#17049
jonathanclark

It seems that there's a driver bug related to Adreno 4xx/5xx GPUs, that are used in Samsung Galaxy S7 and Google Nexus 6 devices. This bug affects applications with multisample anti-aliasing enabled, so it may or may not appear on different webgl demos. Regarding the blend4web engine - this bug appears if WebGL 2 context is used. WebGL 2 was recently made available in Chrome Mobile and unfortunately it's not so stable at the moment and the latest 58 version is buggy. This bug is known and the next 59 chrome beta version works OK.

The immediate solution is to fix the app, by enabling the custom quality profile and setting the "msaa_samples" parameter to 1 before the initialization in the "m_app.init" method, for example:

- this will disable the buggy feature.

posts: 558
Tried loading this link with Chrome on S7 Edge.
I updated Chrome on the App Store to be sure I had the latest. The scene still failed to load, or if it did load, nothing showed up. I see a jQuery plugin failed to load. Here is the debug info: 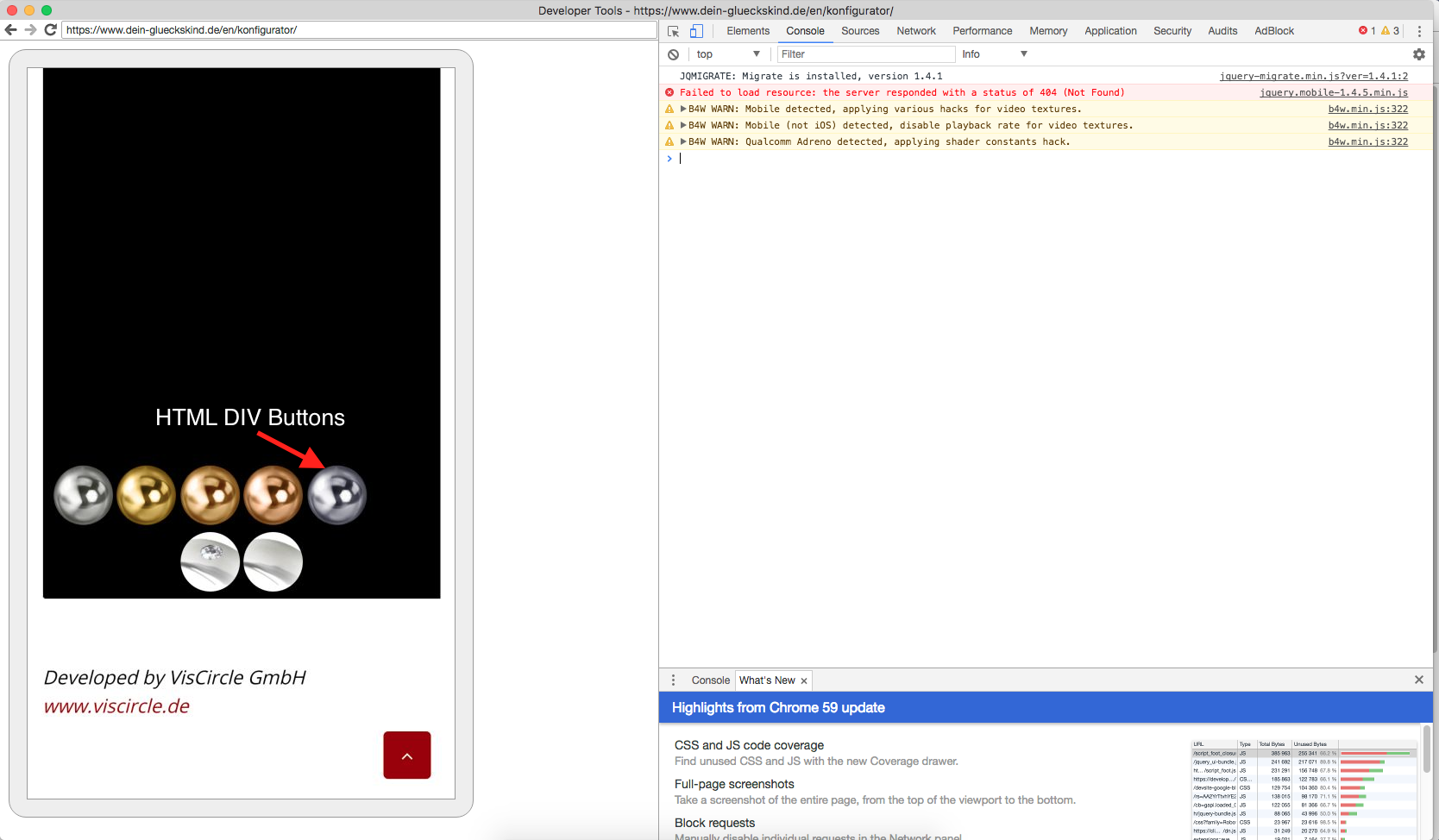 (The round buttons are DIV elements, not part of the 3D scene.)
Hope this helps.
I should add that I have never had trouble with any other Blend4Web apps on this phone. I wonder if you have tried loading the app separate from the page it is embedded in to rule out some code conflict.
Twitter
3dxmedia.com
#18067
Ivan Lyubovnikov

Hi Jonathan, I've tested it on Google Nexus 6 today and it worked fine. Maybe, there are some issues left with S7, which has different GPU.

Tried loading this link with Chrome on S7 Edge.

Hi Will, it seems that you can reproduce this bug, can you show us the output of the chrome://gpu page?
#18070
jonathanclark

posts: 7
After using the fix you've mentioned above and also disabling the debug option we still have 3 devices from our team which cannot load the 3D Viewer and only one of them is using Samsung Galaxy S7.

This bug is quite crucial for us since we've disabled serving the 3D viewer to our mobile clients until it's resolved. We also had a high volume of them reporting problems with loading the 3D viewer.

Here is the chrome://gpu output from all three of them:

After using the fix you've mentioned above and also disabling the debug option we still have 3 devices from our team which cannot load the 3D Viewer and only one of them is using Samsung Galaxy S7.

Regarding the fix: sorry, my mistake, the "msaa_samples" option was introduced in 17.04, hence it doesn't work for the previous versions. I also saw that the application on the site is using 15.11, which is quite old, and you said that you tested 16.12.1, so would you mind to update to the latest 17.06? It already has the corresponding fix for Adreno GPUs (Google Nexus 6 and Oneplus 5). Otherwise, it will require to change the engine source code to apply a fix and then recompile it and replace the b4w.min.js file in the app.

As for Samsung - it's strange because we cannot reproduce this bug for Mali GPU (S7 ships with Adreno 530 or Mali-T880 gpu depending on the model), which is in that particular device you've tested. I think, setting msaa_samples to 1 can help too, but it will also require updating the engine or changing the source code as I mentioned before.
#18077
jonathanclark

posts: 7
Could you please provide information for the fix in the source files?

Could you please provide information for the fix in the source files?

You can add the following line:

or to detect mobile devices only:

right at the end of the "exports.set_hardware_defaults" method in the "src/compat.js" file.
Here is the link to source code: link