Creating plants for a game is not a simple task and often requires an individual approach to model each type of plant.

In the video below, you can see the whole process of making a set of textures for pelargonium, the modelling of the bushs' geometry and the preparing of the scene to export to the Blend4Web engine. 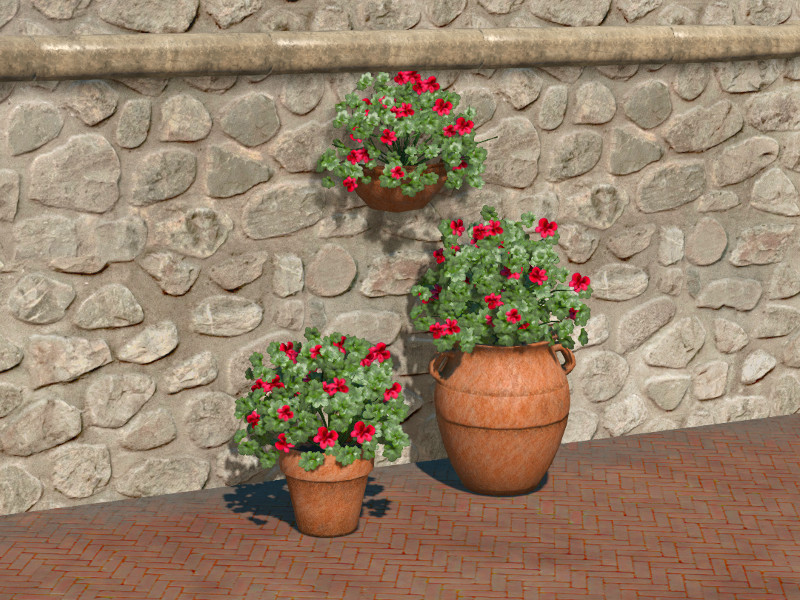 This is a demonstration of the process we found to be most suitable, convenient and possible to use in combination with Blender and the Blend4Web engine. Substantially, this is a continuation of the previous article, in which you can find the video with flower pot modelling.

Some Explanations and Tips

Creating plants is both interesting and complicated process, so please find below some comments.

1. Removing the leaves from the ends of the stems.

After some tests, we decided to get rid of the leaves on the ends of the stems, because they intersect with the groups of leaves on the billboards and therefore it's clearly visible that they are flat.

2. Separating the groups of leaves into smaller ones.

After other tests, we divided the groups of leaves into smaller groups which allows us to create the effect of more lush foliage.

3. Increasing texture space for the groups of leaves.

At the end of the video, you can see that we redid UV-mapping of the texture atlas. We allocated more texture space for the groups of leaves to improve their visual quality and keep the same resolution of the whole texture atlas.

Usually, we bake textures in a higher resolution than it is necessary. Firstly, it allows us to have high resolution textures in reserve, just in case. Secondly, it can be controllably blurred in a graphics editor (for example GIMP), because it can't be done with Blender Render during the baking process (you are free of this problem in Cycles).

5. The direction of polygon normals when baking textures.

It's important to have the correct normals when you bake textures. If a normal map is baked with inverted normals, there will be observed serious lighting artefacts. 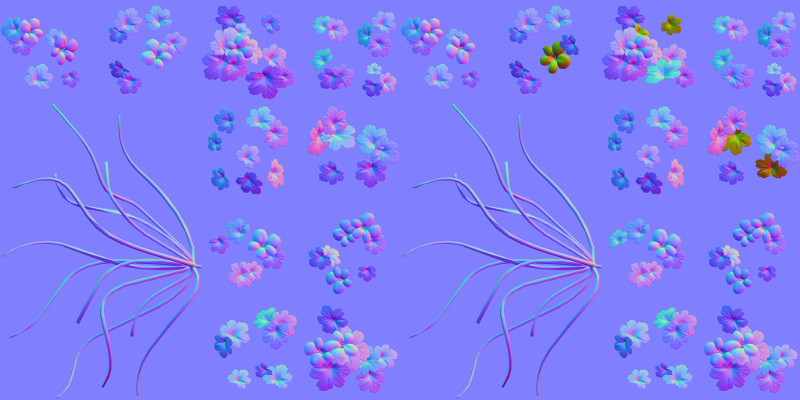 On the left - correct normal map, on the right - normal map with inverted normals on some leaves.

6. It's important to put a neutral color under the transparency area.

The Alpha Clip transparency type, which has the fastest performance than others types, shoud be used for this task. We also recommend to fill transparent areas of the texture with the same color as the non-transparent areas. This is necessary in order to avoid artifacts at the edges of the leaves and the branches. 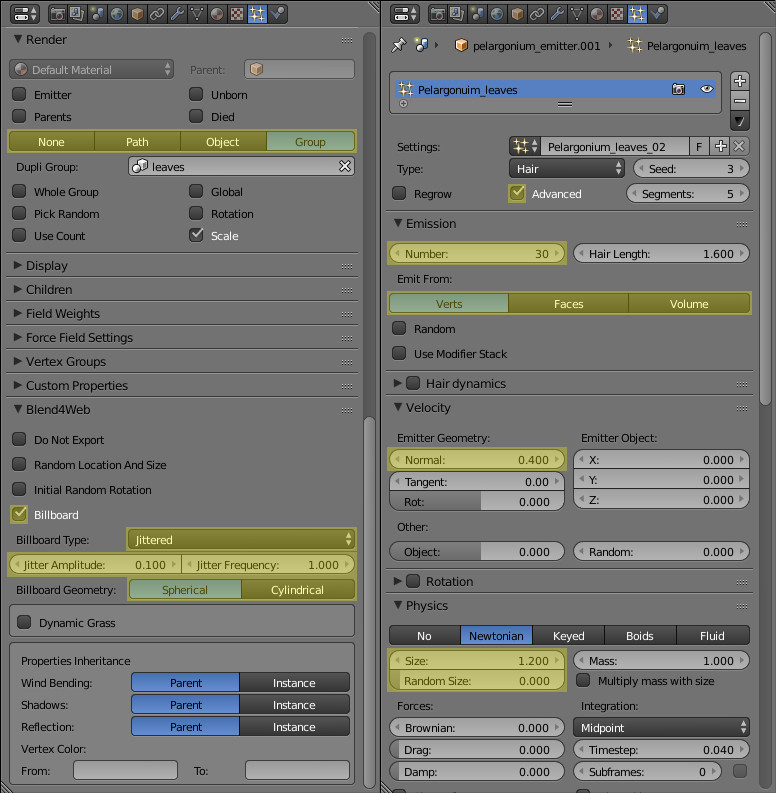 Setting up the particle system for the groups of leaves.

It's very important to configure the particle system of the bushes in the right way. Pay attention to the settings of the Blend4Web tab and to the Billboard Type: it is set to Jittered. This creates a shaking effect on every particle of the particle system under the influence of the wind.

That's all for today. As always, if you have any questions or comments about the video, you can post them on our forum in the specified topic.

Content that is both practical and genuine. Continue to share and promote your knowledge. Thank you very much for writing this article drift boss
16 may. 2022 10:32
sunnyoh123

This is an excellent article. This website has a lot of important information. The two games I'll show you today, Gartic Phone and OvO Game, are among the most popular nowadays. Let's play and have fun.
27 may. 2022 22:38
easton

We are offering Scannable fake ids, driving license and passport that will help you in many situations. Text/Call: +1‪(281) 783-9245‬


We are the producers of legal documents and we provide documents like license,
passport, visa, ssn, citizenship certificate and many more.
If you are interested or for more information please do not hesitate to get in touch.


We are an independent group of specialized IT professionals and database technicians based in the USA and we are specialized in the production of passport, SSN, license, I.D cards, Birth certificates, diplomas and many other documents of very high quality and other services. We have been producing passport, license, SSN, I.D cards, Birth certificates, diplomas and other documents for over 150 countries.(North America, South America, Europe, Australia, Asia and Africa) We Produce Both Real Database registered passport, license, SSN, I.D cards, Birth certificates, diplomas which are legally used and we also produce Fake or Duplicate or Novelty documents which are just use for Camouflage and Can NOT be used Legally these types of documents are not important so we produce on high demand and order.

Airport Taxi Manchester provides the best airport taxi services All around UK.. visit our website for the most comfortable and safe rides.
24 sep. 2022 10:44
JohnDeleon

This is my third issue of the Capri Blog and we only had one day this week before I went back to work. You need to check this roof cleaning and get more new skills for gutters repair. We got another gorgeous coat of colors on our plant. The leaves are turning yellow, bronze and purple. The blooms just opened up, so I decided to take some pictures of them today. We still have some hanging buds left on the Pelargoniums that were planted last fall, so watch out for those too.
11 oct. 2022 00:45
gigene9550

For three years now, activists have been asking for a free Interrail ticket for all young people. The goal is to promote intercultural exchange and make Europe more understandable. How could that be better than a train journey through 30 countries in Europe? That is why they named Free Interrail their project in 2015.buy passport online