Soft transition between geometrical forms (morphing) is a well-known 3D graphics technique, and starting today it works in Blend4Web as well. You can take it for a spin by running the example included in the SDK's Code Snippets. 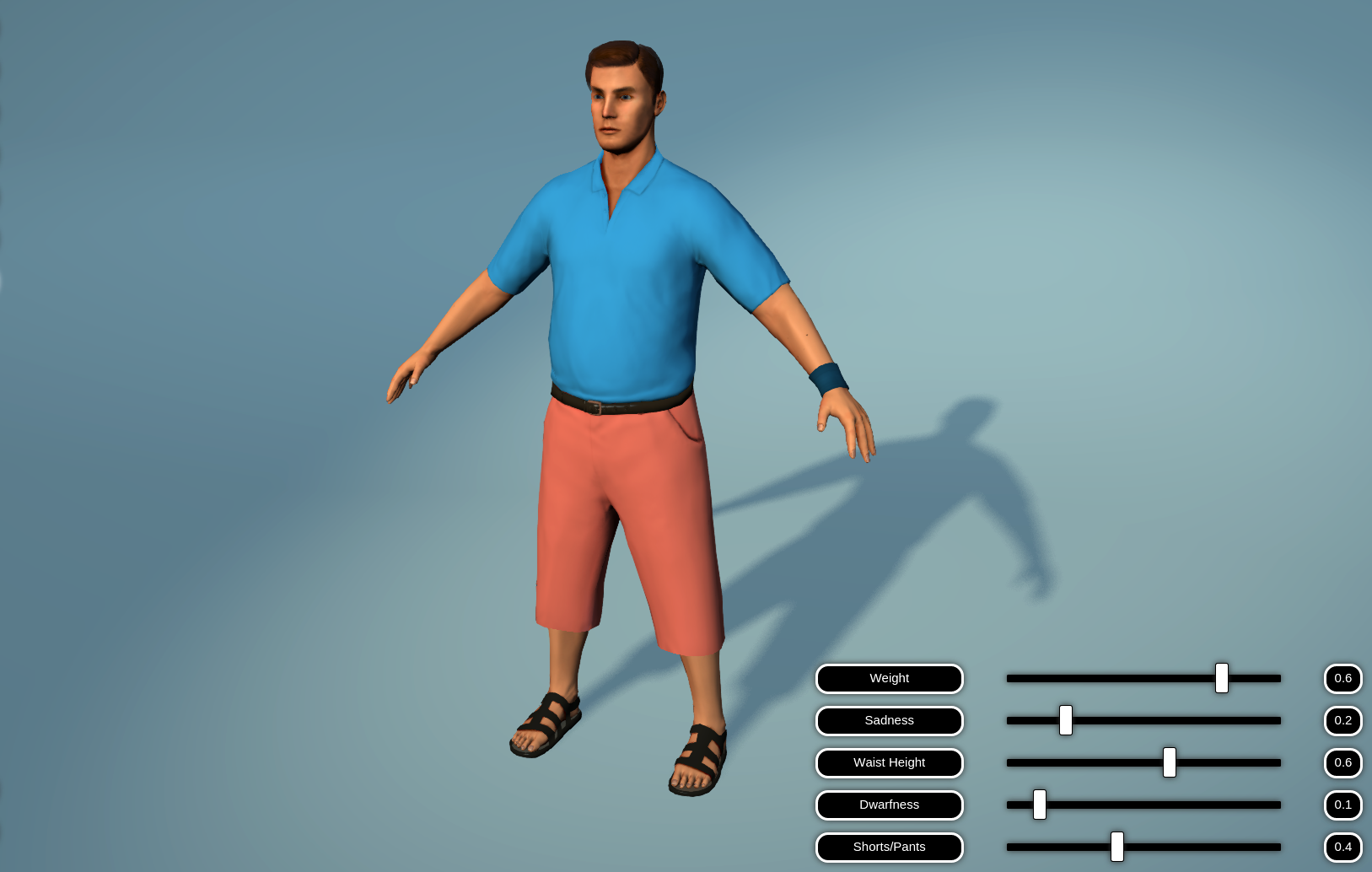 The extreme geometrical forms, which are also known as Shape Keys, can easily be created using Blender's native tools. The shape keys will be exported into Blend4Web if you enable the Export Shape Keys option.

The option for exporting shape keys.

Blend4Web supports all settings applicable to Relative shape keys, including blending using vertex groups and choosing the arbitrary basis key. The shape key drivers can also be used if you prefer. 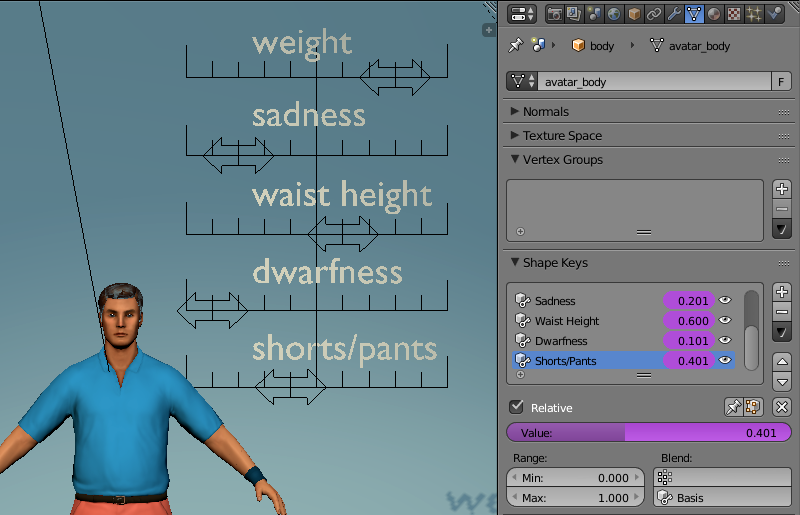 Standard shape key UI. Magenta-colored values indicate that drivers are in use.

After loading shape keys, an application can control them using a method from the geometry module, for example:

Based on feedback from our users, we have added support for Blender's world background settings. These settings will be used if you turn it on under the World tab's Blend4Web panel:

Enabling the use of sky as a background.

The background color can be tweaked by using the Horizon Color and Zenith Color color pickers. We have also implemented all of Blender's other background settings such as Paper Sky, Blend Sky and Real Sky. 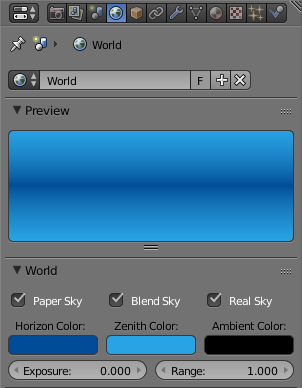 For convenience, you can view the actual background right in the Blender viewport by selecting Display > World Background (this option has been available since Blender 2.73). 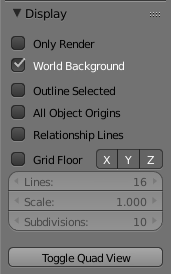 Optional checkbox to display the background in the viewport.

For more ways to change the background, please refer to the manual.

Recently, Blend4Web developers added the Gamma node to Blender's node materials. This patch has been included in Blender 2.74, and now you can enjoy using the Gamma node in Blend4Web too. We would recommend replacing the old B4W_LINEAR_TO_SRGB and B4W_SRGB_TO_LINEAR node groups, though they still can be used for gamma correction.

Gamma-correct rendering is one of most important components of a good 3D image. Experienced Blend4Web users should take into account that the assets can be stored both in linear and non-linear (sRGB) color spaces. The screenshots below demonstrate typical use-cases of color correction - the unpacking sRGB -> Linear and packing Linear -> sRGB gamma. 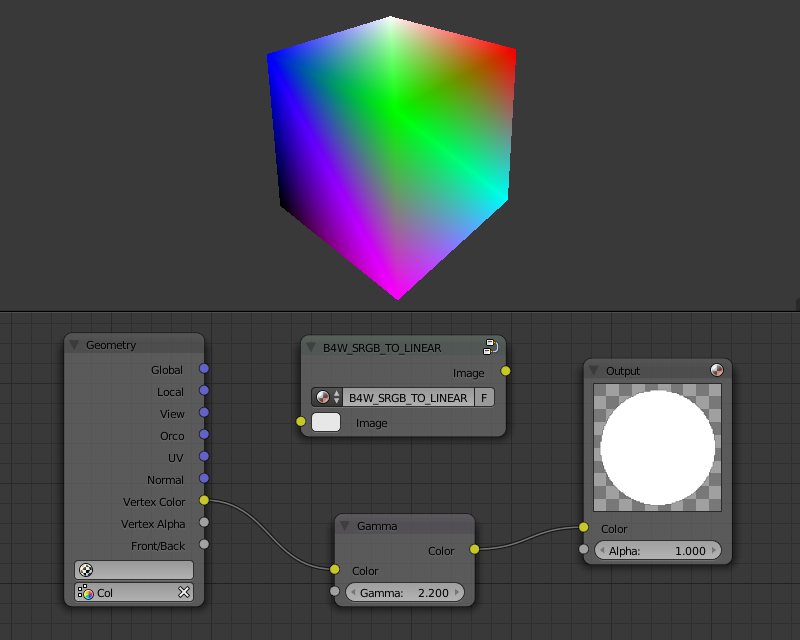 A typical use-case of the unpacking Gamma node: vertex color is stored in the sRGB space in Blender, yet all math is done in the linear space. 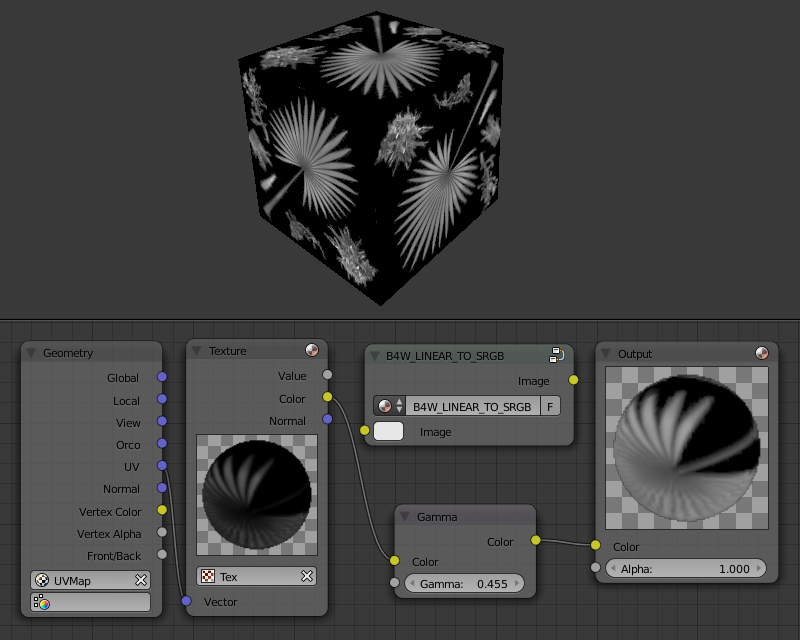 A typical use-case of the packing Gamma node: the texture is used as a mask. Masks are essentially values, not colors, and should not be gamma-corrected. Nevertheless, Blender's Texture node always unpacks images. That's why mask textures must be converted back to sRGB.

You can now use whole text files to make annotations. Text can be edited right in Blender's embedded text editor. Then, you simply switch Description Source to File and specify the file name in the Description field. Also, you can now limit the width of the annotation's HTML element (Max Width). 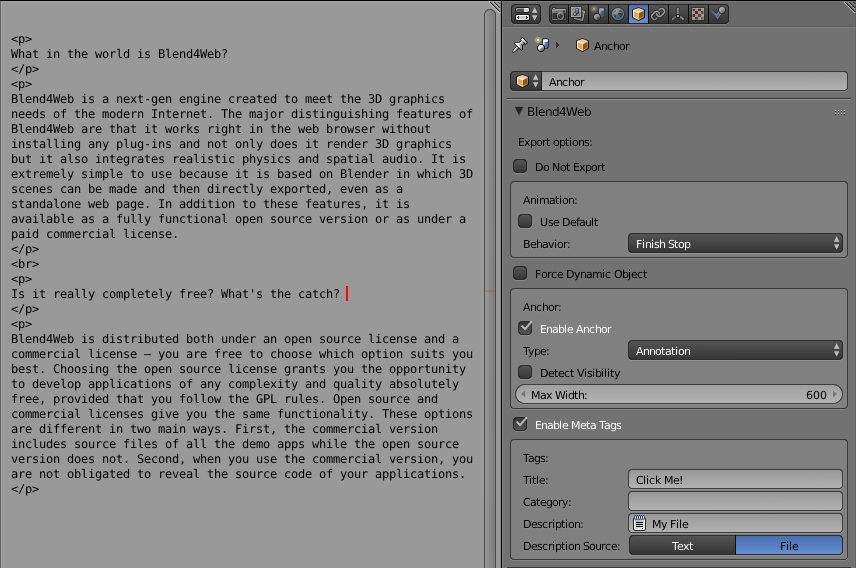 We have listened to what our users have said and have implemented dynamic loading and unloading of anchors. We've also added the possibility to hide and unhide them via common API methods or even using the NLA Script - our visual programming tool.

The Blender development tracker already has six of our patches under review:

We would appreciate your votes and comments in favor of accepting these patches by Blender devs. You can try all these features in action by downloading the Blender builds from GraphicAll: Linux x64, Windows x64.

Skeletal animation is now much easier to work with! Blend4Web now takes into account the relative position of an armature and an object. As a result, you are no longer required to place the armature and the skinned object at the same point and with the same rotation and scale. 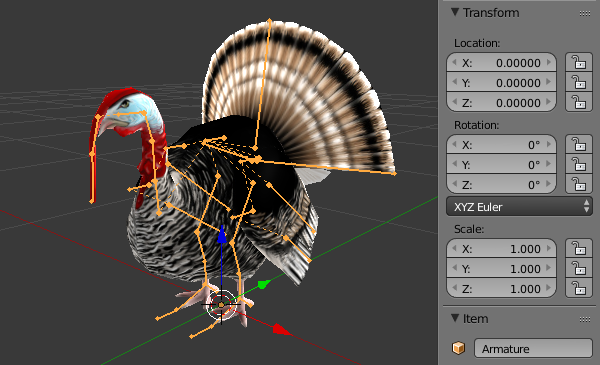 No more need to precisely position the object and its skeleton.

Objects now support independent animation of translation, rotation and scale. You are no longer required to insert keyframes in all channels. The original values of intact channels are now preserved, and can even be modified via API.

The Glow effect and all related components has been renamed to Outline. We think this new name better describes highlighting the edges of an object. A little spoiler: "glow" will be used as a name of another interesting effect to be presented in the near future...

Optimization, again and again... The Uranium physics engine now consists of two files: uranium.js - the engine code itself, and uranium.js.mem - the memory initialization file. Both files must be placed in the same directory. Thanks to this optimization, the overall size of the code has been decreased by 20% while the physics calculation speed has been improved.

Also, the shader compiler has been considerably reworked. Not only has it obtained new possibilities but the performance of node materials has been improved as well.

Above, you just read about the most prominent results we have achieved this month. The full list of changes, which includes the addition of new API methods and the removal of the deprecated ones, as well as bug fixes, can be found in the release notes. Feel free to leave your comments here on the forums.

I have been away for a while; busy with unrelated things . . .

The newest version looks promising. I looked at your example "Code Snippets"; and was especially interested in the Materials API. I have a suggestion; though I don't know how feasible it might be at this point:

It would be great if there were a way that you could create a realtime interactive slider/numerical entry; for each of the material settings that effectively work with Blend4web. Even if it were a separate browser run program (Suchas as your Code Snippets" Example); that could allow a user to develop a material in realtime; and see directly how it would interact as an HTML output. Perhaps it could export a simple text file; that could be imported into Blender and converted to a Material. I realize this could be a can of worms; when it comes to some of the more advanced approaches using nodes; though for basic materials, it could be a huge help & productivity booster.
30 apr. 2015 10:58
Evgeny Rodygin

t would be great if there were a way that you could create a realtime interactive slider/numerical entry; for each of the material settings that effectively work with Blend4web. Even if it were a separate browser run program (Suchas as your Code Snippets" Example); that could allow a user to develop a material in realtime; and see directly how it would interact as an HTML output. Perhaps it could export a simple text file; that could be imported into Blender and converted to a Material. I realize this could be a can of worms; when it comes to some of the more advanced approaches using nodes; though for basic materials, it could be a huge help & productivity booster.

I understand why you have such ideas but I'll try to clarify our position.

Blend4Web always tries to simulate Blender's behavior. Of course, we can't support the full list of features and therefore, we are working on our custom Blender profile which will leave only supported options in the interface. Thus, there won't be a need in the instrument, that you've described. Everything that we see in Blender's Viewport should look similar to what you will see in Browser with Blend4Web. We always move from Blender to the Browser but not in reverse direction (If we speak about importing something from Blend4Web and converting it to a Material).